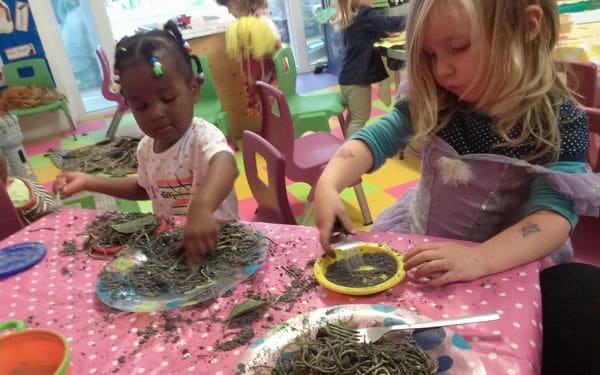 Well the weather has not been very kind to us this week, but it hasn’t stopped the Chimps from having oceans of fun in their room. They have enjoyed some messy messy shave foam play with glitter for added giggles and ball rolling through paint. Some even had a go at throwing the painted balls to land it on the paper. The Chimps have also been having a browse in the colour discovery bags and took turns swapping and exploring items. In the construction area the children enjoyed knocking over their towers and having the occasional chew on the soft blocks. Mr. Robot was out for the Chimps to investigate as they opened and closed clasps and turned its cogs round. Their song this week was “5 Little Speckled Frogs” with the interactive frog gloves. They were very curious when the frogs went missing and some of the older ones were repeating numbers back. Clever clogs.

The Howlers filled the kitchen with the wonderful smell of their egg muffins this week and all the other rooms were a little bit jealous at how deliciously beautiful they turned out. Hope you enjoyed them as much as we wanted to. In the painting area they have been looking at the “all kinds of people” book and creating self portraits, choosing skin colours and pointing to their facial features in the mirrors. Since we like to support burgeoning professionals here at the nursery, the Howler team have been leading a master class for our budding photographers. Choosing objects from around the room, the Howlers set up their photographs, snapped their shots, and then rearranged items or selected new ones for the next batch of photos. They’ve also mixed up their own batch of cloud dough with cornflour and baby wash and had a go at tracing works of art (Van Gogh’s a favourite for some reason). Their music and movement activity was ribbon dancing which required lots of fancy arm movements and a change in tempo and style as the music changed.

The incessant rain has put a bit of a dampener on the Baboons’ running around time so they burned off even more energy than usual with some very active rounds of the “Pirate Game” during music and movement. Since they have ‘Pequods’ and great white whales on the brain, they mixed in a few actions from their current favourite story ‘Moby Dick’ including bobbing in the water like a boat and chasing the whale. Speaking of books – the Baboons just can’t get enough of Alice and Wonderland and even had their very own tea party in the small world area (no Mad Hatters unfortunately). They very kindly offered each other tea with milk and sugar and even some of the teddies had some warm refreshment. In the sensory area, once they got over the unappealing look of black powder paint, the Baboons had a dig through our soil and leaves for earthworms (spaghetti of course). With all this wet weather, I’m sure they can find a few live ones. In the writing area, the children have been enjoying using colouring pencils and felt tips to draw pictures of people who are important to them and/or describe people who are important to them. It’s been a great opportunity to discuss shapes and numbers. Apologies if you have portraits of yourselves with square heads and three eyes. The kids were adamant that this is what their mummies and daddies look like and the adults could only oblige. At the creative table, the Baboons have been making all sorts with pink playdough, beads, straws and ribbon. They have made jewellery, faces, pizzas and played their own little game of hide and seek as they tried to find their lost beads in the dough. In the garden, when they could get to it, the Baboons asked for soap to add to the rainwater that collected in one of the trays so they could blow bubbles through various objects around the garden. Nothing goes to waste at Young Friends.

It’s been all about dinosaurs and pirates (what a combination) this week in the Gorilla room. They have been practicing saying their rather spectacular names (who doesn’t love saying Icthyosaurus and Velociraptor?) and going out on the open sea with ‘Captain Flinn and the Pirate Dinosaurs’ in the book area. In the creative area, the Gorillas had a go at pointillism (dot painting) with cotton buds and paint. They also used spray bottles to colour their sand castles and shapes, spending time talking about how to make up their favourite colours like purple. The Gorillas did manage to sneak into the garden between rainstorms and when they did they went on “expeditions” using the crates to build paths and hide in. Back indoors, they played a rousing game of “Who’s hiding?” using blankets and asking questions to help them guess who’s hiding underneath. In the role play area there’s been a mix of construction work and domesticity as the Gorillas made their tired and hungry builders some food and tea in the kitchen area. Ever the thoughtful preschoolers!