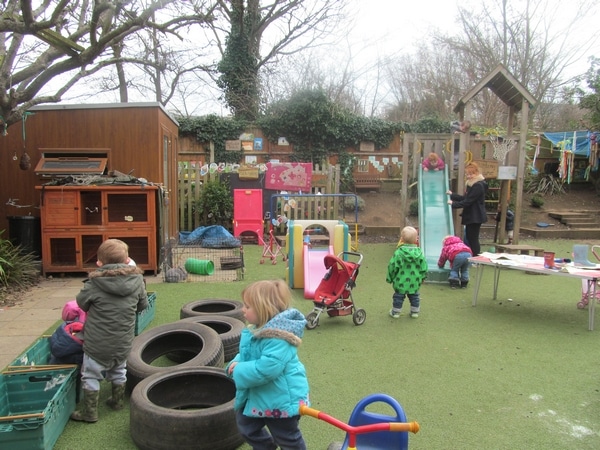 Our Chimps this week were playing with their lovely wooden small world shops and teddies. They were taking teddies for walks and buying them things. They also did some very messy welly painting (see photographs below). They had a great big builders tray full of flour and glitter which they were rather fond of sitting and rolling around in and they also rolled balls in coloured cornflour to make patterns and colour combinations. They are starting a New Year display of a great big Chinese Dragon and they have been preparing by doing lots of bright hand prints to decorate it with. The Chimps have also been enjoying playing with our big cuddly child puppets from around the world which have been making them laugh a lot.

The Howlers have been looking really carefully and getting really excited about their beautiful family board. They want to say a big thank you for all the family photos the children love looking at them. They had sand and buckets and spades in their sand tray and sea creatures in water. They have been making swirling patterns with water and paint brushes on their big black board and have been doing some rather clever colour sorting. They have been singing heads shoulders knees and toes a lot and copying the actions. Sweet.

The Baboons have been exploring moon sand in their role play space station. They have been looking through the telescope and spotting ‘space monsters’ (their words not ours). They have been talking about the time and playing ‘What’s The Time’ (a self-explanatory game). Theey have been painting and printing with pasta and making space ships out of sticklebricks. They hae been exploring the nursery’s new discovery bags too. We have a multicultural bag, treasure bag, senses bag, coloured bags, story bag and a song bag all made by Sophie and hanging inthe Baboon Room for them to explore. If anyone has anything to add to these bags please do all donations will be welcome. They will be evolving over time to keep up learning and interest for all of the groups.

The grown up Gorillas have had another week of spongeing up everything they are learning. There week has been based around the theme of the train. They have been reading a book called ‘Oil Get Off Our Train’. They went to the train station and had the story there. They also had a look around, waited on the platform and went on a train. Very exciting. They have been counting with their numicon set and enjoying putting the shapes together on the numicon boards.Their role play has been a train and train station and they have been charging for tickets and jumping in and out and travelling to all sorts of places. They have been making trains with their junk modelling equipment and doing collages too. The letter this week that they have been learning are ‘n’ and ‘t’ and ‘p’ through rhymes and songs and colouring in. They have been on their computer every day and making their own stories up with the help of props held up by Irene. They were amazing at that. They also had a yoga session all given through talking about a story about a cat. What a week!