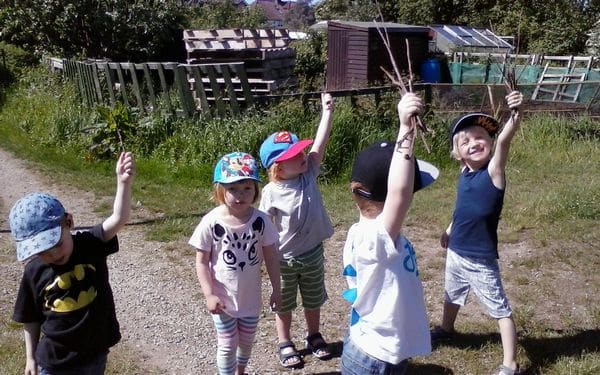 A new puppet show story was narrated to the children this week about a girl travelling the world and getting all sorts of international/cultural presents from the people she meets along the way. Our fabulous Gibbon team used the different languages for the places the girl travelled to like ‘Aloha’ for when she travelled to Hawaii, ‘Marhaban’ when she visited Egypt and of course ‘Hello’ when she met people in London. The Gibbons enjoyed listening to and trying the diverse ways to greet across the globe and watching the puppet show play. Brilliant work from both adults and children! The Gibbons cooled off from the warm weather with the help of their beach water play tray – making pretty patterns with seashells and stones and pretending their fishes were swimming through the paper seaweed. From flowing water to frozen water – the Gibbons cooled down even more as they experimented with clear sensory ice gloves filled with assorted coloured water to create coloured hand moulds which they then crunched to feel the ice inside. Using their rhubarb grown at the allotment, the Gibbons mixed it with herbs grown by them in their rooms and sand over at the Reggio Emilia table. The textures from the different ingredients and materials gave all sorts of various sensory feels and smells for the Gibbons to play with and explore.

Anyone for a picnic…

Making the most of the glorious sunshine, the Baboons had a picnic with their friends in the garden under the shade of the sun umbrella. Munching away on their afternoon snack, the Baboons reminisced about when they went to the park last week and had a picnic at St Ann’s Well Gardens. From cheese sandwiches to ham sandwiches the children discussed their favourite flavours to have at picnics. Then it was up to the music and movement room for stretching, spinning around and balancing on one leg; The Baboons practised their yoga moves and played a game of ‘Yoga Noses’. Is it a guitar? is it a recorder? A game of guess the musical instrument under the blanket had the Baboons entertained with them feeling the distinct parts then try and guess what instrument it could be. Clues of how the instrument could sound and actions were given as helping gestures but impressively Baboons knew their musical instruments well. Over in the ICT corner, the children had big letters and had to look for them on the keyboard and guess what word they were spelling. They took some great photos of each other as well as some brilliant selfies (please look out for in the blog photos).

Goldilocks and the three bears

Though of course there were many other options on offer, there was a strong ‘Goldilocks and The Three-Bears’ theme this week in the Gorilla room from making bowls or porridge from clay to going on a bear hunt around the allotment to find the three bears. They searched high and low between the flower beds and the vegetable patches for the bears caves and wondered around the pathways to see if they could see Goldilocks running away. For phonics this week, the pre-schoolers have been focusing on the letter “g” due to being linked to Goldilocks. They named all the different words they could think of that begin with the sound ‘g’ for example glove, giraffe, glow etc. They also have been various games linked with “n” and “m” and matching pictures of objects the correct letter. Carrying on this theme in the maths area, the children were asked to put the different sized spoons in order of height and measure the size of the bowls with rulers. And of course, with all the themed activities linking with the treasured children’s story, the Gorillas story time and Small world was none other then the fairy tale.

We hope everyone had a lovely half term. Enjoy the photos and have a lovely sunny weekend!

Thats our motto! Making sure we have the right clothing on hand is vital to being outdoors more. The children need to be super comfortable, warm and dry to be able to enjoy the outdoors at any time! #YoungFriendsNurseryHove

As the garden grows so do the amount of places the

The older children love to assist the younger ones