“The Nursery Joins Together In The Garden” 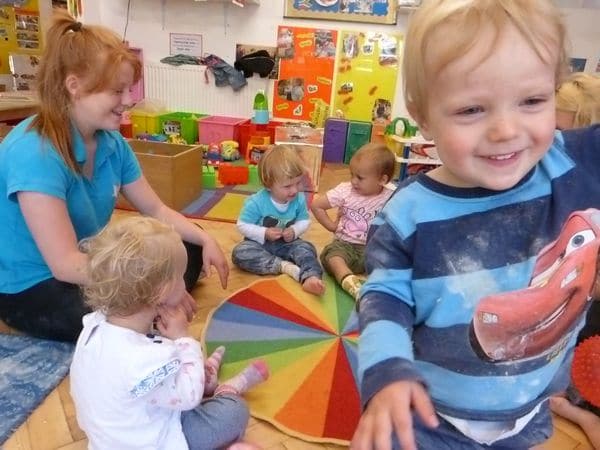 “The Nursery Joins Together In The Garden”

What an amazing sun kissed week we’ve had and we have made the most of every last bit of it. The garden has been an absolute hive of activity throughout every day and the whole nursery has joined together to have a truly magical time.

There have been lots of busy children in the Gorilla room this week with some super activities. The clever pre-schoolers have been practicing counting high numbers with their hungry caterpillar, learning their left and right by shaking hands with different coloured ribbon and learning actions for the months of the year. Sounds like pretty intelligent stuff. They have also been reading ‘Cinderella’ and ‘The Three Little Pigs’ and have made their very own pigs to act out the story. Their recollection and sequencing skills have been put to the test and they came up trumps. The Gorillas have been working very hard building some fantastic individual constructions with blocks. They thought of people they knew and what they would like and made them something special. Then they wrapped them up in mega tape ready to give away. They have also taken part in some special yoga sessions working on breathing exercises. As well as all of that, the children made time to celebrate Noemi’s (their persona doll) birthday with a mini celebration and a plastic cake. They have become really attached to Noemi – she has enabled them to develop their empathy for others and communication skills etc. Please ask Irene or management if you would like to know more about what persona dolls can help children with when used properly – they really are amazing resources. They have made lots of imaginative and rather beautiful junk modeling flowers for their incredible garden role play area.

The Baboons have had another unique activity on their creative table this week. They have used oil, food colouring, glitter and all sorts of other materials to make their very own individual sensory bottles. They all worked really hard and absolutely loved creating them exactly how they wanted them to be and even got to take them home to share with their families. They have been using magnifying glasses all week to hunt for bugs in the garden and exploring how things get bigger and smaller. The launderette role play and safari small world have been continued as they have proved such a hit with the children but have both been expanded to incorporate new resources and elements to explore. Amongst all of that, the Baboons have also been busy watering our now flourishing veggie patch and garden plants and really helping to kick start our growing season finally – it’s been a long wait but at last we are watering and watching the sun help things grow. They have also been chasing bubbles in the garden – no child ever tires of this as you all know.

The Howlers have been creating the most amazing collages all week. They have used lots of different photos of themselves at nursery and have been cutting and sticking them onto to paper. Around the room the little Howlers have been trying on all sorts of different hats and scarves and looking at themselves in mirrors, one of their favourite activities. They have also been stacking different shapes cups and objects and knocking them down which has been causing no end of amusement. They have been drawing patterns and shapes with individual chalk boards and giant chalks too. At music and movement time they have been chasing and popping bubbles all over the room and garden and there has been some wonderfully messy play with a coloured shaving foam swamp in their water tray.

The Chimps have had an absolutely brilliant beach theme this week. They’ve had real sand, a blown up rubber ring, arm bands, goggles, flippers and all sorts of sea creatures. They also followed this up with two trips down to the seaside where they played with the pebbles and each dipped their feet into the cold sea. They cheeky Chimps have also explored seaweed and painted their own sandcastles with feather flags. At group time the children have been learning and practicing the makaton signs for lion, crocodile and frog and have supported this by playing with the same toy animals in their small world area. Outside they have had all sorts of shiny things and lots of other toys out in their cosy outside area.

We have now formally welcomed Mimi and Rea into the nursery fold. Rea is now based between the Chimp and Howler groups and Mimi is extra help for the Gorillas and Baboons. They are both really lovely positive girls and really passionate about working at Young Friends. Please introduce yourselves when you get the chance.

Have a great weekend and long may this fabulous sunshine last!!!