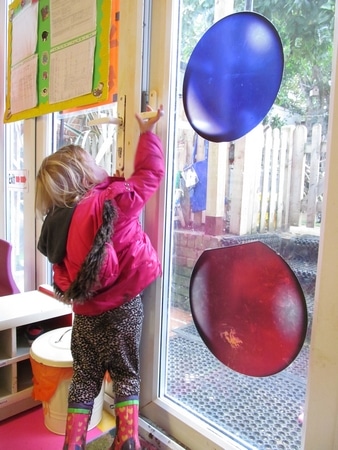 The new rabbits have been fussed over all week and have new houses and toys etc and the children have been stroking and cuddling them – not deterred by the rainy weather.

The Chimps have been having a fantastic time getting super messy with flour and glitter. The Howlers and Chimps have been playing counting games with the counting balls and putting them into coloured buckets. They have also been food tasting and ‘talking’ about the different textures and tastes.The Howlers and Chimps and Baboons all went on an amazing outing to the Sealife Centre. They went out for the whole day and took snacks and lunch and had a really exciting time looking at all the different sea creatures.

The Baboons have been on a visit to Hove Station to look at the trains. They have been playing at being scientists and using magnifying glasses to look at our giant land snails, who were brought downstairs for the experience. The children dabbed the snails with water and paint brushes to see the changes in the patterns of the shells.

The Gorillas have made some really wonderful tasty bread rolls – some of which ended up a bit glittery by accident. They have been focusing on letter sounds and working as a group to complete the giant alphabet floor puzzle. They have been doing some great music sessions too copying actions and movements and bouncing around a lot!