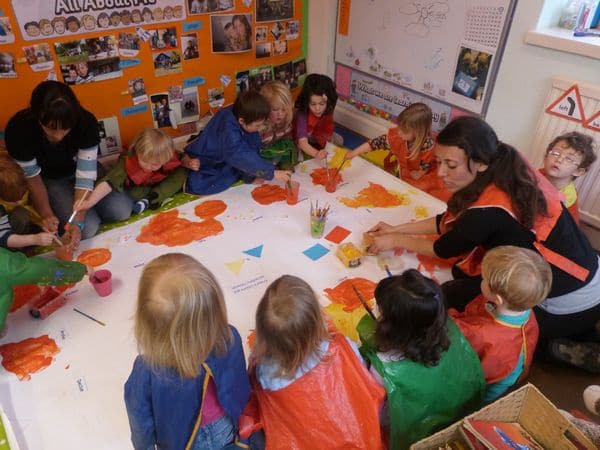 This week we have welcomed a few lovely new children who have been joining in all of the fun both at nursery and out on trips in the rain and sun. There’s been some fantastic activities throughout the nursery so here’s a little run down of the events….

The Gorillas have had a super time. They are getting so good at their phonics and have now mastered ‘o’ as well as all of their other sounds and have been thinking of lots of fantastic words beginning with the sounds they have learnt. They did a truly amazing activity where they all sat around a seriously huge piece of art paper on the floor – they painted shapes in different colours, working as a team. They did such a great job. The lucky pre-schoolers have also been playing in their dinosaur cave, practicing their stretching and poses with musical statues and talking about good manners and being helpful. They had some great music sessions and even did the conga around the Gorilla room which was fantastic to watch. They were giggling away – brilliant.

The Baboons have been loving their marine life theme this week. They’ve been identifying all the different species in their role play aquarium and learning about them through video clips on the laptop. Nemo has been talked about at length. They have been listening to whale music at snack time (very atmospheric). They’ve had some amazing things to explore in the room, with bright colourful squidgy feely bags taped to their window, painting with megablocks and even making their own gloop with the grown-ups. As well as all of that they have also been exercising their fingers at group time and tracing around different shapes with chalk. They have been practicing their cutting skills and had a brilliant light and sounds session in the blackout area in the Gorilla room.

The Howlers have had three new little ones settling over the last two weeks and they’ve all made fantastic starts. There’s been lots of fun things going on in the room, including an amazing sea life small world scene including real sand and all sorts of ocean animals to play with. The teddy bears picnic in the role play area has been a real hit with the children who have been making food and drinks for the cuddly toys and even had their own picnic snack in the area. The children have been practicing their action songs and are getting great so make sure you keep practicing at home and the main activity has been a wonderfully messy one with lots of colourful paint and balls to roll around in it making artwork. Somehow with all of that going on, they also managed to squeeze in an exciting trip to ZT fitness where they absolutely loved exploring the soft play area – whizzing down the slide and climbing the ramps etc.

The Chimps have had a lovely time this week. They’ve been exploring with different wigs and brushes and brushing each other’s and their grown up’s hair. Carly has made them some brilliant new sensory gloves with all sorts of things in them from glitter to sawdust and they children have been fascinated by them. In their messy area they’ve had jugs and pouring equipment in their water tray and a foam/sand mixture to explore in their builders tray. At group time the cheeky Chimps have been roaring like dinosaurs and pointing their family members in their special photos.

Everyone has been enjoying the new tea menu which is now on a three week cycle like the lunches etc. If you would like to see it please ask – it is up in the kitchen. If you would like the updated menu to be emailed please ask – we thought you had been inundated with new menus and may well be bored of getting them. But this week they have had bubble and squeak and falafels which went down a storm.

Have a great weekend everyone. Pictures will appear here later this weekend x