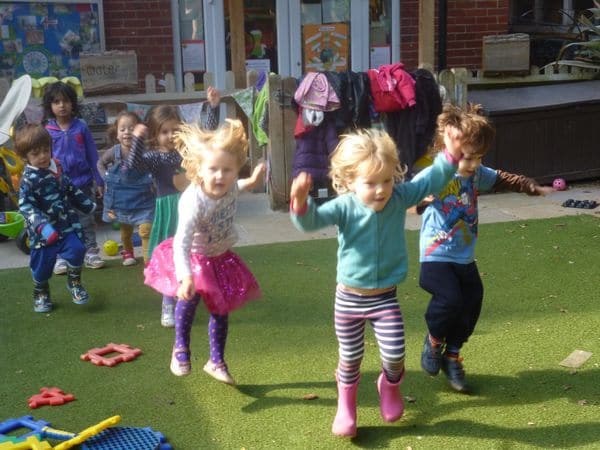 Autumn is beginning to show and our nursery groups have been making a start on their seasonal displays with some wonderful Autumnal activities this week. We’ve also had some absolutely brilliant role play areas for the children and lots of outdoor all weather fun. Here’s a run down of what each group got up to…

The Gorillas role play area was transformed into a doctors surgery this week. The children learnt to bandage each other, diagnose their fictitious injuries and illnesses, take temperatures and give out medicine. They also dressed up and used their hospital beds to rest and even had their own hospital waiting room. On the creative table the children made some wonderful pieces of art where they made salt trails of their initials and squirted paint with syringes to colour the letters in. They look brilliant and have gone up on their display board for all to admire. The clever preschoolers used their new sorting dinosaurs to make groups of species, colour, size, number and helped each other to guess what the weighing scales will do as more dinosaurs were added. The Gorillas also started their Autumn display by doing some lovely leafy rubbings in autumn colours and by decorating their very own squirrels with autumn coloured and different textured collage bits and pieces.

The Baboons have had the most amazing science lab role play area this week. They have been super busy making and mixing special potions with bicarbonate of soda and vinegar and experimenting with different combinations, colours and textures. They also gathered leaves from the garden to explore in their lab with magnifying glasses and tweezers etc.. Around the room the children have been rolling marbles down ramps and into pots to practice their aim and turn taking. On the creative table there has been lots of colour and mess as the children have been mixing shaving foam and paint to create some colourful fluffy mixtures. At group time the Baboons have played with magnets and investigated what they can pick up and what they can’t and at music and movement, they have been bending and stretching to their yoga music. On top of all of that, the 2’s have also made some fantastic volcanoes in their sand tray by pouring water into holes that they made.

The Howlers have really enjoyed exploring scented and coloured playdough this week. They have moulded, squished and cut it up to their hearts content with cinnamon, vanilla and nutmeg. At group time the little ones sung their favourite songs and practiced singing loud and softly with the staff. On the creative table there was colourful finger painting and giant chalk to draw with on the mark making table. In the garden the Howlers were playing with balls and practicing their balance by climbing the mud mound and walking along wooden beams.

The Chimps focused on reflection this week, using their special mirror mat and lots of different sized, shaped and coloured mirrors around the room. They spotted and recognised themselves and their friends in the reflections and enjoyed exploring in this way. In the messy area the babies used their hands and arms to make paint prints , explored shaving foam in their malleable tray and even used rice to fill and empty containers. At group time the children were read their favourite stories and there was even time for some fantastic music sessions with a selection of brilliant instruments for them to shave and bang together.