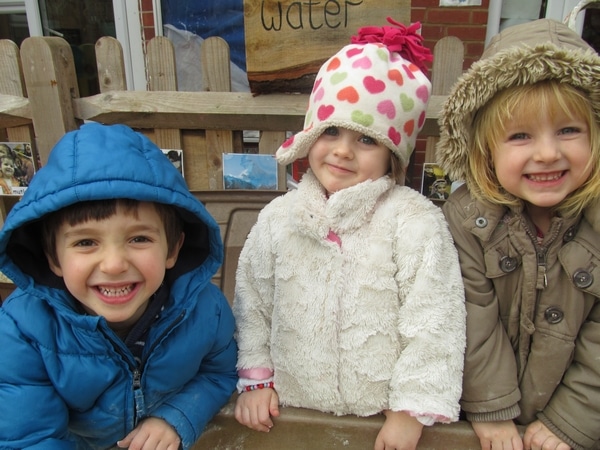 It is hard to believe we’re nearly half way through January already but it has been a steaming start to the year at Young Friends. We have had lots of lovely new children joining the fun in the last week and a half and have more starting gradually over the next few months. It’s been great for both children and the team to get to know our new friends and we are really looking forward to a fantastic year ahead.

The Chimps have welcomed three new faces over the last two weeks and they are all who are all settling in brilliantly. It has been surprisingly mellow considering….. Carly and Cheryl have been teaching them all animal MAKATON signs this week in group time. The room has been full of toy vehicles to move around, hats to try on and treasure baskets to explore. They have been clapping along to songs at song time and The children have also been busy doing hand printing and even managed to fit in some cooking too.

The Howlers have had an action packed week as always. Just to name a few things they have been cutting and sticking positive images to make into laminated books (don’t worry the team did the laminating) for them to look at together. They have been burying and searching for hidden glittery and shiny treasure in their sand which has been really good fun and they have been playing with marine life and doing role playing with their green shiny ocean scene. They have cooked every day this week. The team have been using our nursery healthy cook book to make healthy tomato and cheese puffs which the children have really enjoyed. They have used herbs and rolling and mixing skills and they came out really well. They have also been playing ball games at group time with their bumpy sensory balls and playing really good games of catch.

The Baboons have getting really immersed in their very own market stall in their home corner complete with a till, money, baskets, weighing scales, real fruit and veg for weighing, counting and selling. They’ve been very creative with coloured shaving foam artwork. They have also been learning about the importance of hygiene and made germ bugs for their new display by blowing paint through straws. They have had a whole area full of paraphernalia to do with babies and they have been dressed, washed and thoroughly looked after – their parents have clearly taught them well! They have even found time to dig for worms in the garden.

The Gorillas have kicked off the New Year with a bang – literally. They had a visit today from Irena’s friend who is a primary school science teacher. She kindly offered to come and do some fascinating age appropriate science experiments with our preschool children and they absolutely loved it.It was perfect for them. Among other things they made erupting volcanoes and marvelled at an electrical orb. They did experiments with oil and water and lots of other things. They have been running about like mad outside and practicing their footballing skills (which were pretty impressive I have to say) and Sizzles (the rabbit) has been accompanying them to the garden. Their role play corner has been a school this week with registers, book bags, uniform’s and lunch boxes etc. They have been working at holding pencils correctly using ‘quacky fingers’ as well as practicing rhyming words in extended learning time. They welcomed three new friends who are all having a fabulous time.

Strange at nursery with small amount of key workers kids but today joy was had as we let the rabbit and guineas loose in our woodland garden with the bees and butterflies #animalsexploring #lookingafterchikdrensmentalhealth #snapforchange ... See MoreSee Less

Charlotte Cowlin imagine if we could 😍

Good morning everyone. So its the start of a bizarre phase in our nursery careers. Many of us are opening for a small group of children (it'll be lovely to see them won't it?) and still waiting for definite news of support, insurance policy clarification and more. So many uncertainties. We are having to watch the pennies - reuse, up-cycle and use things to the end. Even though this is emotional and hard, this has to be the start of a new more sustainable way of life. Lets practice now and carry on forever. Because we're having a taste of life when it goes a bit wrong - lets not let the next one because of climate change because that will be a lot more permanent. Chins up everyone. Lets support each other through this time. Stay in contact and let us all know how you are doing. Much love x ... See MoreSee Less

Look how many plants were planted by Ben our gardener today! All native woodland plants getting used to their new home #wishingwedidnthavetoclose #biodiversity #nectarforbees #naturelovers snapforchange ... See MoreSee Less

Wow that has changed so much looks lovely

Interacting with natural environments allows children to learn by doing and experiment with ideas. Nature provides endless opportunities for discovery, problem solving, creativity and stem education and this is why we LOVE being outdoors! #outstandingchildcare

This error message is only visible to WordPress admins