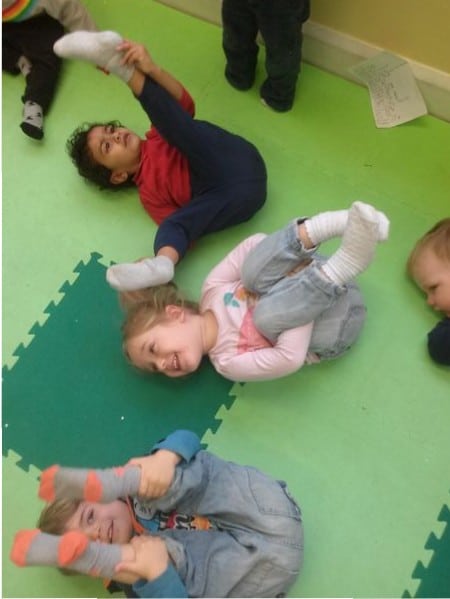 The nursery is all aglow with the spirit of Christmas and the team are kicking their feet like ducks in water as we jam pack the week full of crafts and merriment. I’m getting more and more used to calling our youngest group the Gibbons and the dedicated spaces have worked wonders in opening up their play and creativity. In the Green room (formerly Chimps), the children have made handprint wreaths and salt dough decorations. The keyboards have been out so they could practice their typing skills with letters to Santa. Literal letters because I think they’re a tad young for persuasive essays on why they should get a motorized Bumbo. Not sure if they make those. Maybe they should. In the White room (formerly Howlers), the little ones have not been practicing self-control as they’ve gone full throttle into opening the presents in their role play Christmas tree. We’ll do our best, but can’t guarantee they won’t get on with some early unwrapping. In the small world area, the Gibbons have been driving through some rather blizzardy weather as they made marks in their flour snow. The children have also been practicing their Christmas song and, hopefully, they won’t suffer from stage fright on the big night.

The Baboons have been belting out their Christmas song in true two-year old fashion as they rehearse for the big Mulled Wine evening event. They’ve even been using Makaton throughout which should be quite a treat to see on the night. The Baboons have also donned their elf caps and have been working away in their role play grotto. They’ve even been making a few phone calls to Santa to ask for more presents to work on. In the Maths area, the Baboons have been counting their Christmas baubles as they place them on their tree mats. You may notice that their main display board is getting a makeover into a cozy, holiday home. The Baboons’ stockings are hung by the chimney with care, and they’ve personalized their Christmas tree decorations. The children have been a little concerned about the animals in their North Pole small world, so they made them some houses to keep them warm. For their malleable play, the Baboons have enjoyed red and green cinnamon scented playdough. They have trying their hands at all kinds of modelling including reindeer and elves. I’m sure Santa will be very pleased with their efforts.

The countdown is well and truly on as the Gorillas have created a Father Christmas whose cotton ball beard is steadily losing its cotton. Each day the children remove another one from his beard and are getting ever so excited as they know what happens when Santa loses all of his beard. Yay! All I’ve heard from the office is jingle jingling bells as the Gorillas practice their Christmas song for the mulled wine evening. I hope you’ve been hearing them rehearse at home. Christmas is particularly insightful in our nursery as we have families from all over the world and the Gorillas have been learning one another’s particular traditions. The Christmas crafts have been coming fast and steady with snowmen, reindeer and doves. For their writing activity, the Gorillas have been tracing over Christmas words such as star, tree, jingle and, of course, Santa.  What’s the holiday without the sweet smell of peppermint. Well, the Gorillas did not have any peppermint on hand but they did make candy canes using pipe cleaners and beads. Very concentrated looks on their faces as they tried to work the beads onto the pipe cleaners.