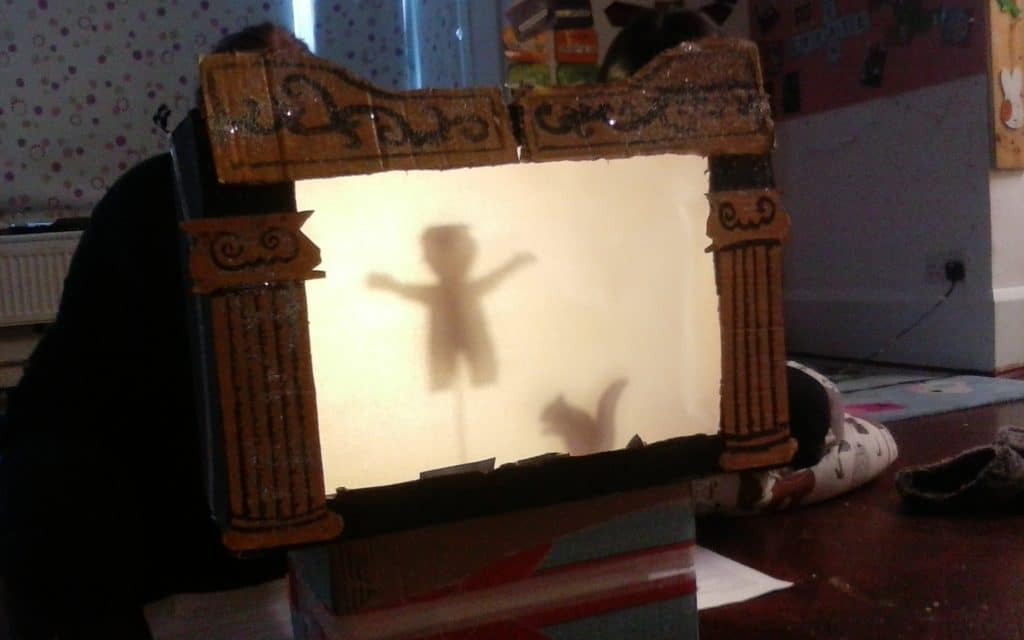 Sssshhh!  The Gibbons played sleeping bunnies this week which they enjoyed pretending to be bunnies however there more excitement then pretending to be asleep. Jodie’s marvellous puppet show came to the Gibbon room this week. Her invented story about Sam the Squirrel in shadow puppet form showed the Gibbons how went travelled around the world meeting his different friends and animals from around the world collecting nuts for Winter. It was a huge success and we are hoping this show will go to Hollywood and make us millionaires! At our sensory table in the Gibbon week, the Gibbons used different materials and flour to feel and make patterns. The flour was very popular. In the dance studio, the Gibbons copied actions and danced to the music in our musical and movement time.

The Baboons played musical statues in our dance studio this week learning to stop and start when the music would stop. We used colours to show what to do. with red meaning turn around and green to jump. Alex even used different languages in the session and the children copied. In kitchen time, the Baboons worked with pasta, rice and flour. Flour was the favourite of the week, and by the end of it all children and staff were covering in it! Reggio Emilio in the Baboon room had flowers, spices and rice and the Baboons felt the different textures and used them to make different patterns. In group time, we used stickers to show different emotions and feelings. The Baboons used this to show how they were feeling. Old MacDonald had a farm was used this week to make our own farm. The Baboons used soil, straw, sawdust and sand to make it and put the different farm animals in their places. Getting ready for Multi-cultural week next week, the Baboons made flags of different countries and painted them the colours. Our baboons are very excited for next week’s activities and we be using these lovely painted flags.

The persona doll came into the Gorillas room and spoke about how sad she was because the boys didn’t let the persona doll Kaila, to dress up as a superhero. Kailia told everyone that everyone can dress as however they want so if boys want to dress up as fairies they can and if girls want to dress up as superheroes or fireman they can. Lime and lemons maybe sour but they are great for still life drawing! Small worlds ‘sea life’ shells were arranged with the different sea life animals in the small world area. Children spoke about the selfie centre and what they saw when they went there. The Nature kids made hedgehog house’s this week. Children named the materials used to make the bedding and the walls. The Gorilla’s helped make the bedding from soil and used duct tape to make the house stay strong. They spoke about how they would like hedgehogs to come and live there at our allotment and hibernate for winter. The Gorilla’s took part in role play, playing the part of mummies and daddy’s and mimicking adult life. They read the news using the newspapers as they said they have seen grownups doing this a lot. In the Gorilla’s room, over by the story area, there is a new rainbow chart. The Gorilla’s practised their sounds and letters and identifying the different colours of the rainbow. They spoke about their favourite colour and pronounced the different words. The Gorillas practised writing their own names this week. We have printed their names for their and they practised the letters and wrote them out. Now on their artwork they are able to start writing their own names on them.