“Children Listening To and Acting Out Favourite Stories” 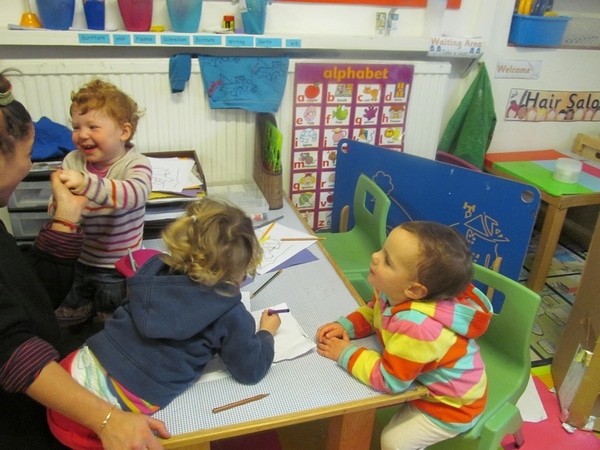 “Children Listening To and Acting Out Favourite Stories”

The first week of March saw the children (and team) running out into the garden playing in the sun at the start of the week and splashing in the puddles come the end of the week but either way we’ve had another wonderful week at Young Friends.

The Gorillas have been very busy all week. They have been looking closely at the letters in their own names and trying to spell them out with their magnetic letter boards. They’ve had the guitar out at music time and have been listening to Christina playing to them. They have been playing and singing along to some new songs and been sounding great. Their focus story has been the Cloud Boy which they have all loved getting to know and then the artistic Gorillas made some fantastic pictures to send to ‘Cloud Boy’. They even made their own cloud shapes with coloured salt dough. In the water tray they have been exploring different objects and seeing which ones sink and float and they even made time to go on a fabulous trip to the park to see a bug hotel and enjoy a wonderfully sunny Tuesday.

As always there has been non stop fun had in the Baboon room – this week oodles of exciting activities took place. They’ve been exercising their brains with alphabet fishing and counting and organizing with ‘compare bears’. They have had their own building and digging site with sand and diggers etc. and have played fun parachute games during music and movement. At group time they’ve talked about different sports and in cooking time they filled the nursery with the lovely smell of healthy goats cheese pepper boats which the children have been cooking all week.

The Howlers have a great time this week making lots of lovely(?) noises playing their instruments and singing along to songs with them. On their creative table they’ve been exploring paint with their hands and have made some beautiful hand prints for decorations. At group time they’ve been comparing and sorting colours and practicing naming them with their coloured gel shapes. In the role play area they’ve been busy looking after their baby dolls and they’ve had a sandy safari with lots of different animals to play with and name.

The Chimps have had the multicultural instruments this week and they have absolutely loved exploring them and shaking them and discovering their different sounds. They’ve also had giant ice balls to feel and roll through flour and glitter. They have been making a wonderful mess. In their sensory area they’ve had some amazing new sensory bottles to play with with lots of different effects with oil and water and colours – some of them are luminous – they love those ones. There have been keyboards out for the cheeky chimps to tap and press and on the main table they’ve made some beautiful straw paintings.

Next week is Eco Week and of course Red Nose Day so next week’s blog should be an interesting one too. Have a really wonderful weekend everyone!