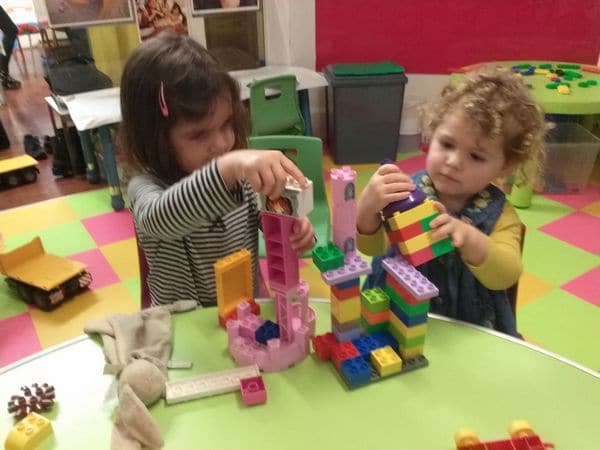 Well quite a few of the Gibbons have returned from our break triumphant with some new walking skills as they toddle around the green and white rooms. At this time of year, there is always an influx of healthy new year’s resolutions and the team started their week off with a focus on healthy eating and brushing teeth. At group time, they read “Anna Brushes her Teeth” and mimicked teeth brushing actions and learned a song about it. For their designing and making activity they created their own healthy dinners using cut out images of food and stuck them onto plates. The musical ICT toys have encouraged our more tuneful Gibbons to practice their singing voices while the adventurers took a trip to the safari in their small world area. The little ones have also been enjoying the shape sorters and focusing on arranging sizes.

Animals, animals, animals have been the theme of the week for the Baboons as they focused on talking about size, colours, actions and empathy. “Mr. Pusskins” was the story of the week, and the Baboons showed great concern for the cat who had run away from home, only to miss his loving human again. At the problem solving table, they have been sorting the compare bears and using the vocabulary of size they learned with the bears to describe the animal footprints they made in salt piles (“small,” “tiny,” “big”). They’ve also been talking about the growth cycle of animals, including ourselves, as they spoke about babies during their circle time. In the small world tray was a sensory maze as the animals had to traverse a terrain of rice krispies, flour, rice and rocks. The Baboons have used the rocks to create dens and enclosures for the animals and the krispies and rice as grazing areas. So attentive those Baboons.

The Gorillas have opened their new year with a refresher session on the Golden Rules such as listening attentively and following instructions that keep them safe and happy. Their story focus has been books about kindness and honesty and why they’re so important. Sounds and letters has been focused on the ‘o’ sound. You may have noticed their brand new kitchen in the role play area and the Gorillas have gone kitchen mad as they prepare food and drinks for tea parties, balance trays full of dishes, and organize things into the cupboards. We can barely coax them away from the area as they have been heavily engrossed in all things domestic. For their creative and designing activities, the Gorillas have been focused on space. They’ve painted moons, created rockets and explored patterns as they printed various objects onto planets. For music and movement, they’ve mimicked space travel and anti-gravity as they’ve moved to different tempos.