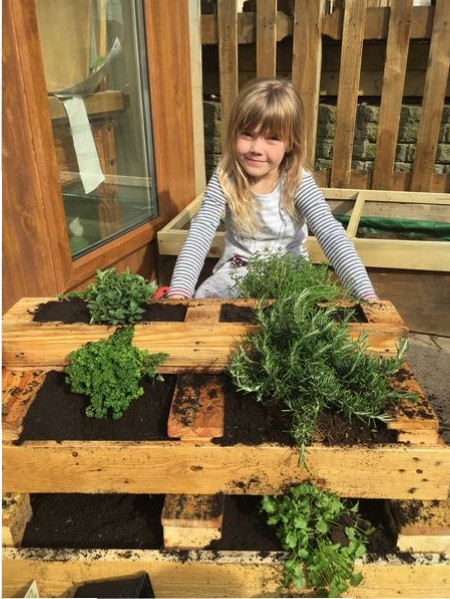 Since we were down a day, the good times were ramped up this week in the Gibbons.  Of course, it can sometimes be a bit difficult returning to nursery from a long weekend, so the Gibbons have been learning Makaton signs for feelings. Some of the older Gibbons have been particularly attentive to their friends and alerting the team to their needs using “sad” hands. They’ve also been using the “selfie” feature of their tablet to make faces and take pictures of them.  It’s not all been funny faces and sad hands though as they’ve also made fizzy cloud dough, a new sensory activity I’m sure the other groups will swipe. The children mixed cornflour, bicarbonate of soda, and vinegar together to create a bubbling dough with all the peculiar properties of cornflour once the fizzing stopped. The shape sorters have been out this week for those little problem solvers. This week’s mark making was roller painting with everyone’s favorite toys, cars. Vroom…vroom.

Well, the dinosaurs have been living it up in the Baboons’ small world tray with their own cave, grassy and straw areas. They’ve even been reproducing as I saw a very nice collection of eggs being closely guarded by their mothers. Although, perhaps some of the younger dinosaurs thought it would be nice to explore the garden and a few of them got lost in the sand, so the Baboons had to search through for them. They even pulled out the magnifying glasses. Speaking of adventure, one of their dinosaurs, Nalah, went on a trip with Hannah to Jersey! Nalah visited the Dinosaur Park, of course, and lounged around the beach. If you don’t believe me, please ask the Baboons to show you pictures of her trip. She had a great time and is very photogenic. The Baboons have also been talking about textures. All kinds of dinosaur textures from smooth and rough to spikey and squidgy. Since they made such a nice den in the garden last week, the Baboons have also been all abuzz over den making in their room this week. They even used their parachute game as an opportunity to make a shelter. That’s called the enveloping schema and we apologize if your sheets and fabrics are in a muddle and the laundry basket’s gone missing. In the group time area, the team have been using their behavior necklaces and emotions poster to go over our positive behaviors and how they make us feel. The 2’s may be notorious for being terrible, but they have a great understanding of the importance of pleases and thank yous, sharing and caring.

This week, the Gorillas got a lovely surprise as their beans have finally sprouted and are thriving in their cozy sunny spot in the room. The children have been noticing whether the soil is wet or dry so as not to over water and have been determining which beans are growing really tall and which ones are growing a bit slower. The train station is still going strong as there’ve been many trips to London, ladies and gentlemen with their purses and bags and…Buzz Lightyear. Might be the train coming home to Brighton. Their sounds and letters activity this week was Cross the River which has the children thinking of words with an initial phrase or sound. Eboné was on hand this week to do a social activity to visually demonstrate the effect of negative and positive behaviour on people using balloons. The children identified actions that would make the Little Pink Balloon get bigger/happier such as sharing, saying please and thank you, and offering to play with it. Then they identified actions that would make it sad such as hitting, calling it names, and not letting it play with them. Afterward they all had a go at drawing different emotion faces and blowing up their own balloons with happiness. Don’t pop them with all that excitement now Gorillas!