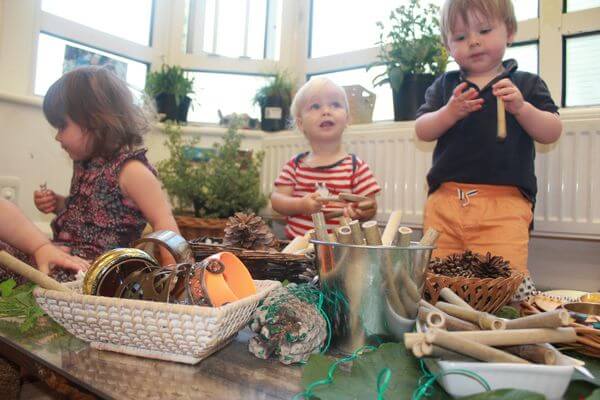 This week the Gibbons have been immersed in so many adventurous activities. One of their absolute favourites was playing exciting games with the parachute. An object would be hidden under the parachute and as one of our brave explorers went beneath the bright colours to find the lost treasure the cheeky monkeys would shake the parachute and laugh with excitement to see what the mini Indiana Jones had found. The Gibbons also got to enjoy their very own private beach in their role play area, with summer clothes and hats that they could cool down in. They loved checking the thermostats around the room and excitedly getting into their skirts, shorts and hats. The little monkeys giggled excitedly as they opened and closed the thermostat lids whilst pretending to drink water from them. They got to enjoy making castles and patterns in the sand, they had so much fun they wanted their fishy friends from the water play to come join them. They were so happy with their Summer beach getaway and exploring they had to dance about it. Throughout the nursery the sound of the Gibbons clapping their hands and stamping their feet to the beat of their favourite music on a tinfoil dance floor could be heard with a lot of happy giggling. The littlest Gibbons were so excited they wrapped tin foil around themselves to make skirts, bracelets and hats so they looked extra snazzy for their party.

The Baboons have been a creative bunch this week. They’ve been getting nice and sticky, making shape collages, they thoroughly enjoyed spreading glue with spreaders over their paper (and hands) and sticking all their favourite shapes on to make their masterpieces. When a child found a shape they liked you’d hear a happy squeak of ‘a square, I got a square’ from anywhere in the nursery. The children loved pointing at items around the room and excitedly telling their friends what shape it was. After all the excitement they enjoyed cooling off in the garden with the water tray. The Baboons let out howls of laughter when they got to play with red bubbly water. They had so much fun blowing the bubbles around the garden and showing their friends how to do it with them. With cups and bowls to fill and empty the children had a great time making big splashes in the water and making even more bubbles. After cooling off and running around exploring the garden and saying hello to the bunnies the children were extremely excited to become scientists and mix magic potions together. Using lots of bottles the baboons could mix water, oil, sand, glitter, shells, paint, beads and all sorts together. The children eagerly made their potions and ran to their friends to show them what they made. They shook them to show each other the colours changing and to hear the sounds they made which led to lots of excited giggles.

The Gorillas have been showing off their fine motor skills to everyone around the nursery. In the Reggio Emilia area, the gorillas had some very focused expressions as they used tweezers to pick objects up and then showed their friends with big smiles on their faces. They carefully used scissors to cut up dry leaves and magazines to stick on to paper. They loved picking pictures out of magazines to cut out and create beautiful artwork with. They also decided that their farm needed some organising. They created enclosures for the different types of animals and made up stories about adventures on the farm. They told each other about different experiences they have had visiting farms and seeing animals. They then created voices and took the animals on exploratory expeditions around the rooms and in the dance studio which they thoroughly enjoyed. Your children had the greatest time with Tatty Bumpkin Yoga as ever – you could hear the laughter from the next road over. Instead of being miniature king kongs the Gorillas played a yoga game where they were each a different building. They held up large cut outs of buildings, if they were in the city then the gorillas would hold the building up as high as they could like skyscrapers and if they were in a small town they would sit and hold their building low to the ground. They also laughed hysterically as they pretended to be superheroes bravely protecting the nursery flying around with their friends. They certainly have super human energy as even pretending to be Jedi masters fighting the dark side and going on an imaginary trip to the post box where they met a friendly cat didn’t tire them out. To have a rest before they carried on with their fun filled day the children lay on their stomachs and imagined a candle was on their backs, the gorillas tried to muffle their giggles as they tried to see who could be the stillest.