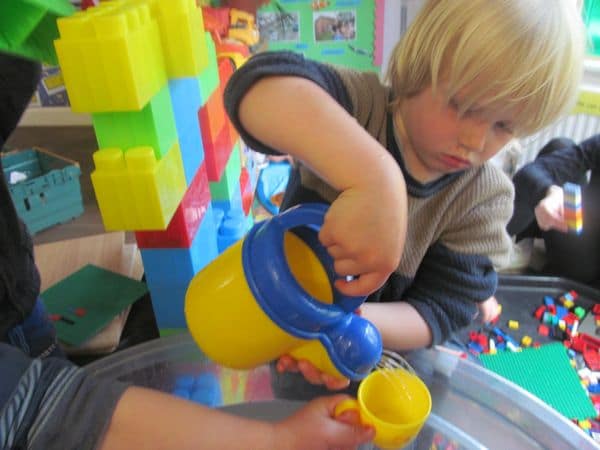 We may not have had much mid-week sun but we’ve definitely seen the month of May out in fine style at Young Friends this week. We’ve had painting, sticking, cooking, sports and much much more so here’s a rundown of what each group has been up to.

The cheeky Chimps have had a beach scene in their messy area this week. They’ve made real sand castles, played with blue ‘sea’ water and had all sorts of marine life toys to play with. The main activity of the week was fruit tasting where the children squished, mushed, tasted and explored all sorts of fabulous fruit. In the room there’s also been new scented bottles to smell, bracelets to try on and African musical instruments for group time.

The Howlers have been incredibly creative this week, making amazingly colourful and textured artwork with coloured glue and various feathers. The children have also been helping the staff make yummy fruit smoothies by mashing the fruit and mixing the yoghurt which they’ve enjoyed at snack time. At group time the clever little ones have been practicing their animal noises and makaton signs and around the room the Howlers have also been loving filling and emptying containers with coloured rice, exploring jelly and using their fantastic office role play.

The Baboons have had a super safari theme this week! They’ve learnt all their animal names with flash card games and been on a special safari hunt around their room and the garden to find all of the hidden animals. At group time the children have read a special story about teeth cleaning and practice their brushing skills with a tooth brush and set of giant teeth. On the round table there’s been brilliant sticking activity where they’ve used real sand to create textured pictures and around the rest of the room there’s been 3d shapes to sort and clothe sorting in their launderette.

The Gorillas have been practicing their dancing skills this week by moving to all sorts of different music from different countries, languages and cultures. At group time they’ve had another visit from their Japanese friend Noemi the persona doll and they’ve played a Spanish card matching game by spotting pictures and repeating back the Spanish words. On the creative table this week the children have used different sized marble and paints to create some beautiful marble paintings and in the garden they have practiced their running and ball skills with some team games.