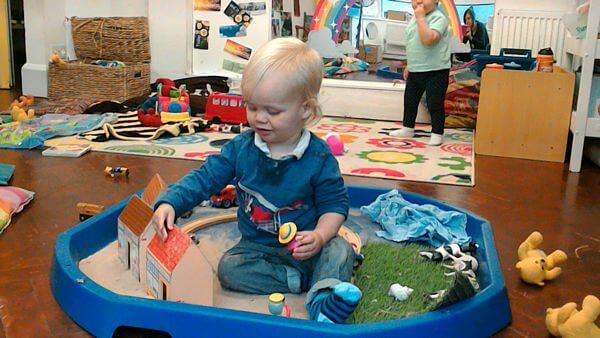 The Gibbons have been very creative this week – the clever little so and so’s created their very own Young Friends town! Using small world toys, boxes and cushions, they created a beach where their model people could go swimming and a train station for them to travel to see friends; there were shops for shopping and fields for cows and sheep and lots more. The Gibbons happily set things up and babbled to each other, laughing at a jokes the adults just couldn’t understand – kid talk! After all this creating the Gibbons turned the tables and set about doing some destroying… The Gibbon team set up shaker bottles in triangles and the children took turns rolling balls toward them to knock as many of them down as they could. When the bottles fell down the Gibbons squealed with laughter and clapped their hands, then the team would reset the shakers and the children excitedly knocke them over again. The Gibbons also enjoyed rolling the balls to each other and throwing them to the adults – slightly less destructive.

For their new role play area, the Gibbons enjoyed making their very own microwave. They spent time picking colours and painting an old nappy box with lovely patterns and colours. They smiled at each other as they chose their colours and painted the box (and their hands – and the table). Once dried an adult cut a door into the box and set it up in their role play kitchen. The Gibbons excitedly placed bowls and plates of food in the microwave, opening and closing the door. Once they decided the food was cooked they toddle over to an adult to offer them the delicious meal. The Gibbons would stand in front of the adult expectantly and when they appreciative noises the Gibbon in question would giggle loudly and rush off to make something else in the microwave.

In the Baboon room engineers were hard at work creating a complex railway system for their little service people. The children cleverly worked together – linking the tracks up and telling each other where they might lead to. The Baboons got very excited about using a tunnel and some bridges for their trains to go over and through; and once ready the Baboons squeaked with excitement as they chose trains and started pushing them along their rather complex railway system. Some Baboons balanced tiny model people on top of their trains pretending they were drivers and Young Friends was filled with ‘clicketty clack’ and ‘choo choo’ noises.

In the conservatory the Baboons put on a special musical performance for the team and used all the instruments they could find to make beautiful sounds. Some children enjoyed playing the drums and setting a beat, others played the maracas, xylophone and some simply liked to dance. The Baboons enjoyed a game of ‘Guess the Instrument’ – during which your Baboons closed their eyes whilst an adult shook a maraca, drum or bongo and the children would cleverly call out what instrument they thought it was.

The Baboons had a great time trying out teabag painting. Using raspberry and peach tea bags the children moved them over their paper to create beautiful artwork that smelt delicious. The Baboons wet the bags and splodged, stroked, shook and squished the tea bags over their art work admiring their smelly creations. They held up their pictures to show each other and went around to each picture to take in a big whiff.

Your adventurous Gorillas have become experienced travellers this week. First they gathered around and eagerly helped one another create lots of buildings and runways with the small world resources. The children excitedly chattered away about what each building would be for. One Gorilla decided one building was going to be the restaurant whilst another decided another should be a swimming pool etc. An adult Gorilla asked what sort of food they would be serving, if it would be healthy? The child giggled and said healthy and yummy like nursery. Another building would be where passengers would sit and watch the planes going on holidays. The children rushed around the room collecting planes to use in their Young Friends airport. The children would say where their planes were going to fly to and rush up the run way before taking off around the Gorilla Room. There were planes going home, planes going to nursery, planes going to Spain, and planes going to newly discovered lands. The children excitedly pretended they were getting on to their friend’s planes and going on a special adventure. The children told adult gorillas about holidays they’d been on and what the weather had been like and that they should go somewhere sunny as its raining here.

After all their travelling the children gratefully sat down at tables and got to work at making their new self-registration board extra special. The Gorilla room fell eerily quiet as the Gorillas concentrated on writing their names. The team wrote out everyone’s names in big letters and the Gorillas copied the letters. Once completing their letter or name the children would hold it up to show everyone. The Gorillas glowed with pride at their beautiful letters and would point at their friends letters if they were the same. After each letter was complete a chant of the letter could be heard throughout the preschool in excitement.

In the Reggio Emilia area, the Gorillas were faced with a whole host of natural resources they had collected from park trips. Using scissors very carefully the children cut up leaves, twigs and petals. They mixed the cut up natural resources together to make exciting mixtures and watched the colours bend together to make a beautiful bowl of colours. They took turns in taking a handful of cut up raw materials and sorted them by size, colour, texture, etc. The Gorillas were happily making patterns on the tables. The children old each other how pretty their artwork was and worked together to combine their creations to make a masterpiece.