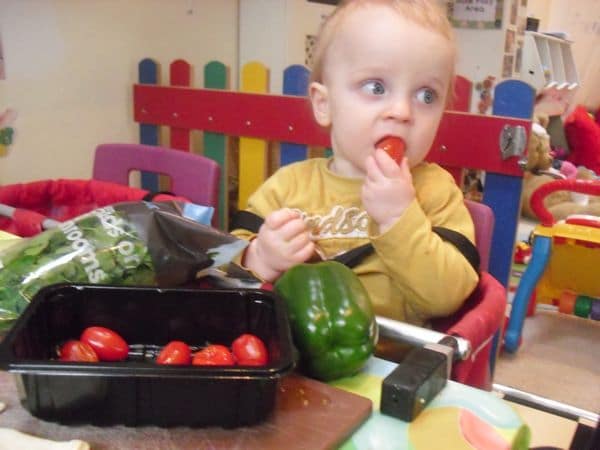 Well despite the cold we have been out in the brisk weather and getting lots of fresh air. Wishing that Spring weather to arrive! There have been Eastery activities, music, excercise, lotTs of learning and masses of fun. So what have our wonderful monkey groups been up to this week…

Our Chimps have been doing lots of getting muddy and planting. They have been in the veggie patch and helping to get it ready by patting down the soil in the pots and generally making it look nice. They have made some rather special Easter cards for their families and been decorating polystyrene eggs that they have displayed rather beautifully in cake cups and a bed of grass. each Chimp has made their own ‘grass head’ out of tights, grass seed and soil and over the coming weeks will watch their hair grow! They have also been planting herbs and making lolly stick labels. They have been looking through, shaking and changing the colour of things with their coloured water blocks and they have been giggling away as they feed Sizzles the rabbit carrots. Lucky Sizzles. They have been having lots and lots of stories, listening to relaxing music and having teddy bears picnics with teddies and tea things. They ahve also been getting out the tunnel outside for the crawlers to wriggle and chase eachother through.

The Howlers have also made some great Easter cards for their families. And some very sweet chicks. They have had pirate role play all week and have been searchingfor treasure (coins) in their new sand tray full of sand. They have been playing with their giant collection of sparkly bangles and necklaces – something they never tire of. Their fish have a new tank which is now on their level so they can see them all the time which they love. They have new ornaments too – a Nemo and the Turtle (from Nemo) and some bright coloured star fish. They have had ots of shape sorters out all week and have been copying different actions in music and movement.

The Gorillas have been learning all about the letter ‘g’. The gurgling plug song that goes with it is another hit and we are sure it has been repeated a lot at home. They have been decorating their eggs with lots of different coloured paint and tissue paper etc. They have been playing with the dolls house and all the little people and furniture. The Gorillas really play beautifully with this when it is in their room. Either in pairs or on their own it is lovely to watch them become so immersed. They have been markmaking with sand and sticks and individual trays which has been great as they have been able to make their own individual uninterrupted patterns. The casle is still being used to the max – they adore this role play it seems. They have been bringing in costumes etc. from home to use too so they must have been talking about it a lot. They have been planting cress to watch grow so should see some action their soon. In their music sessions they have been learning ‘Zumba’!