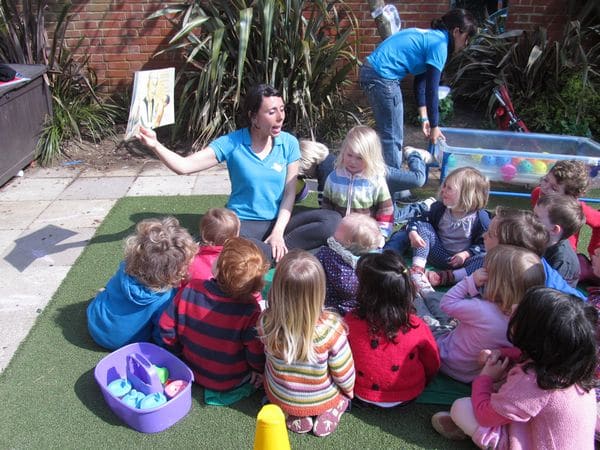 Our little Howlers had a party for Maya who will soon be off to the Baboons and sadly missed by her Howler friends. They danced around and had balloons and party music. They have been pretending to be all sorts of animals with their small world creatures and farm. In music and movement the Howlers whooshed and waved colourful scarves and ended up pretending to be animals (again – they do seem to love doing that). They were doing painting with brooms and making wonderful patterns – they giggled and had a really wonderful time. They did some beautiful collages with a wonderful array of beautiful coloured tissue paper, scrunching it and laying it colour on colour to make other beautiful colours. They had a role play tent out all week and pretended to be by the beach. They adore going in tents those cheeky little Howlers!

The Baboons were very high brow this week. They covered a massive floor space in a giant piece of paper and put a selection of music on the Ipod – then with a bit of prompting they painted fast, slow, delicately and roughly according to what the music feeling was. They had better keep the result as it will no doubt be worth a lot of money a few years down the line! They carried on fishing for pretend fish in the fish tank and playing with their role play aquarium. They played Crash Bang Wallop! As a group and practiced taking turns and played more music games as they identified their favourite theme tunes.

The Gorillas had a very musical week – they are so good at making up dancing moves to different themed music and this week they danced and twisted away to surf tunes. Oh yes The Beach Boys were blaring out all week and those little bottoms were wiggling away. They read Pinocchio and then did some junk models of the boy himself – they coloured in his actual face and added it to bodies that they made. Their role play baby clinic has been amazing – just like a real one and the children have been weighing, feeding, washing, taking temperatures, typing away on the computer and everything else that they might do in a clinic. They have been playing a homemade game of consequences which has really encouraged amazing talking in a group. They have been playing with the new marble run and tracing letters on our letter cards with whiteboard pens – very impressive. This week the letter of the week has been ‘L’ and of course they have been singing away with their phonic songs all week.