“Children Preparing Their Own Snack” 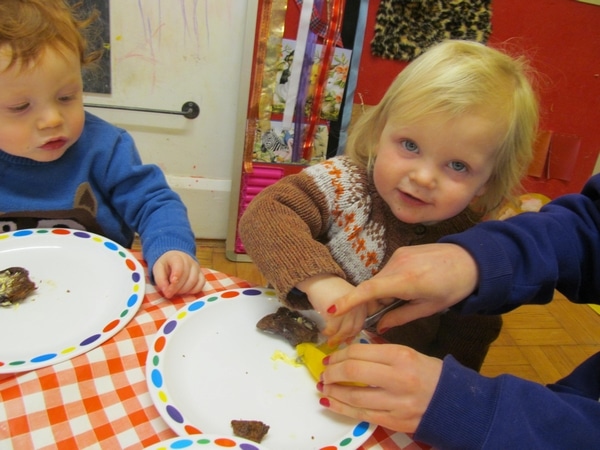 “Children Preparing Their Own Snack”

The cheeky little Chimps this week as you can see from the pictures had a really lovely time doing some painting rolling balls around in paint and making patterns. They have also been pushing all different sized cars around and down ramps and round corners. They have had all sorts of different shiny things to explore and they have been playing with slimy noodles and doing noodly paintings with them. They welcomed a new friend – Elfie’s younger sister Bee who started settling with the Chimps on Friday.

The Howlers have had a lovely new tool ‘shed’ to play with and this has been the main focus of their role play area. They have had hard hats and jackets and hammers and screwdrivers and have been having a whale of a time. They have done lots of cooking and have created some spinach and ricotta pasta parcels and fajitas too – wonderful. They have been playing with cars and planes and driving them round roads made with Duplo. They celebrated Leontine’s second birthday with balloons and games and candles and singing too. They, like the rest of the nursery, got a new set of ‘grown up’ cups and have been enjoying drinking carefully out of them with two hands. They have been having a go at spreading their own snack too. They went on a little visit to see Sizzles the rabbit and give him a stroke in the preschool and caused a bit of havoc which the Gorillas thought was very funny.

The Baboons have been doing lots of savoury cooking too. They have made their own tortillas for snack time and being very independent making their own snack every day. They have also been drawing shapes and letters in sand trays and playing with the small world safari animals in the sand too. They have been running around, bouncing and throwing and playing basketball in the garden and dancing with balloons on their dance mats. They have also been pouring coloured rice onto templates to make different shapes. The Baboons, like the Gorillas have new cups and are keeping them on their place mats – they are doing so well at it and really enjoying finding their names.

The Gorillas had their first full week with their new friend Curtis and have been doing too many things to mention them all here. But we in the office have certainly been enjoying watching. The children have been doing lots of phonics and numbers in really fun ways – we have been hearing letters shouted out everywhere. They have been on their new computer every day practicing with the mouse and moving the cursor in different directions to play educational games. They have also been recognising animals and saying the sound of the first letter. They read the Gruffalo and talked a lot about feelings and how being a new child at nursery must feel. Their description skills amaze us each time they have a discussion it’s just fabulous. They have been singing phonic songs and drawing (pretend) letters on each other’s backs. They also have new cups and have a new system where they keep their grown up cups on their own name place for the day and take responsibility for filling it up when it is empty. They have been making each other better all week in their doctor’s surgery complete with real stethoscopes, computer screen etc. They have been doing some wonderful music and movement sessions and lots more.