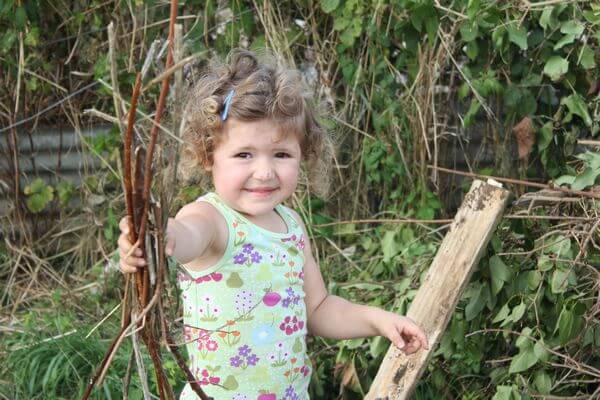 The Baboons have been catapulted back to the Jurassic period 199.6 to 145.5 million years ago this week with adventures discovering which dinosaurs lived in what type of landscape. With play trays filled with sand, water, grass, sawdust, leaves and all sorts of other paraphernalia the children explored the different textures and decided which dinosaurs would like to live in which play tray. Baboons excitedly built mountains and desert plains with the sand making picture in the sand with their fingers for the dinosaurs to look at. In the water tray the excitedly added rocks to make caves for their dinosaurs to hide under. When the box of dinosaurs was opened they shrieked with delight as they each picked a dinosaur. The baboons giggled as the big baboons told them what type of dinosaur they had. Some baboons didn’t like the dinosaur names and decided to rename their dinosaurs. The baboons then giggled as they decided where their dinosaur would like to live. Some of the dinosaurs were plunged into the water tray and discovered the amazing caves the children had created for them. A herd of diplodocus (and fluffy) were moved into the grass play tray. The children giggled to each other as they buried their giant dinosaurs in grass to play hide and seek. The children showed each other what type of dinosaur they had, told each other what colour their dinosaur was and created entire personalities for them. A scary looking T-Rex loved eating marshmallows and a stegosaurus had an amazing time making smoothies with the baboons in their home corner.

After all their fun with the dinosaurs, your high brow Baboons didn’t want come back to the present day. They decided they wanted to visit the cave men – 3.7 million years ago! The children excitedly gathered together all the wooden blocks they could find to build houses and structures that the cave men and women would have lived in. The Baboons helped each other create caves and small rickety houses the cavemen could camp out in. One baboon decided they wouldn’t want a roof because then they couldn’t see the stars at night and their dinosaur friends wouldn’t fit inside when they came to visit. The children then took turns in stacking blocks one on top of the other to build a sky scraper so the cave men would have somewhere to go to work. Some of their dinosaur friends were a bit clumsy and accidentally knocked the tower over. The children squealed with excitement as they built an even bigger tower to replace it. The baboons were so happy with their new tower and houses they invited their dinosaur friends over to take a look. The children made up amazing lives for their dinosaurs, some went to work in the tower for the day whilst their baby dinosaurs went to the park and other dinosaurs went swimming in the water tray.

After all their exciting time travelling the baboons teleported themselves back to Young friends and up to the dance studio. The children enjoyed an imaginative yoga session. The baboons stretched out their arms and legs as high as possible to be as tall as the tallest dinosaur, plodded around the room like stegosauruses making big strides with their legs and roared like hungry tyrannosaurus rexes. The baboons then imagined they were lying in the roofless house they had built for their cavemen and women. The baboons stretched out their arms and legs up in the air trying to touch the stars with their toes and fingertips. The Baboons shushed each other saying the stars will run away.

The Gibbons went all natural this week exploring the wonders of our earth. The gibbons chirped with excitement as they collected leaves from the garden to do arts and crafts with. Back in the Gibbon room they pained their leaves carefully making delicate mark making and creating colorful patterns. The Gibbons laughed as they painted their hands and showed each other proudly. With the help of their Gibbon leader they gently pressed their painted leaves face down on to a piece of paper and peeled it back off to reveal a beautiful, colorful leaf prints. The gibbons blushed crimson as everyone who came to the room complimented them on their masterpieces.

With the creative juices flowing the Gibbons were not ready to put their paintbrushes down. The gibbons picked out their favorite pet rocks from the reggio emillia are and went to work making their rocks the brightest, most colorful rocks that even Dr Seuss would be impressed by. They made big sweeping brush strokes and mixed colours together to make their stones stand out from the rest. The gibbons were so quiet with concentration you could hear the splotches of colour being pasted on to the rocks. The Gibbons enjoyed this so much they wanted to paint all the rocks they could find. Once all he rocks were painted the children waited patiently for them to dry in the sun. Once day the children twittered with delight at their colourful creations – magic.

From wherever you were in the nursery you could hear the sounds of happy squeaks as the gibbons played in the sand pit. The gibbons took out their kitchen utensils and had a great time mark making in the sand and pouring sand from containers into other jugs and boxes. They used spoons to dig holes and create mounds. The gibbons shrieked with laughter as their feet were buried in the sand. They wiggled their toes and shook off the sand and grab their feet laughing before starting to bury their feet again. Using their water bottles they squirted water over the sand to make hand prints in the sand and create sand castles and wet sand patterns.

The Gorillas have been a very busy bunch potion making this week. In the Reggio Emillia are the gorillas sieved flour into big mixing bowls, they added flowers, pasta, rice, and carefully cut up leaves and twigs with scissors to create magic potions. They worked together to choose the ingredients and laughed at the thought of what their magical concoction could do. The adult gorillas were slightly worried at one little gorilla’s suggestion that it could make the adults into old people but thankfully the ingredients were chosen to make their mummy’s and daddy’s buy them all the toys they want. They showed each other what they had used in their potions and helped each other mix their ingredients with big spoons and pour ingredients out of large jugs.

In the writing area the Gorillas were showing off how smart they were with playdough mark making. Each gorilla had their name written down on a big piece of paper. They then rolled out their colourful playdough so it was nice and flat, using their fingers the children made marks in the dough that matched the letters in the name. the children would yell out the letter the completed and excitedly showed their friends what letter they made. The children revelled in scrunching up their creations to roll out again and create more letters and helping their friends.

The Gorillas had a lot of fun making artwork with flowers which they found in the garden and park. They chose their favorite flowers and showed their friends. When walking into the room the Gorillas would rush over to show you their flowers and tell you about the colours and where they found them.  The children smelt their flowers and told their friends what they smelled like. One little Gorilla made everyone laugh by saying their flower smelt like old socks, when a friend said that smells gross the child said ‘no its my favorite smell’! each to their own I guess. Others said their flowers smelled like mummy or daddy, their gardens at home and like their teddies. Oh to be a child! The Gorillas carefully cut their flowers up and plants up and stuck them on to paper to make beautiful flower pictures.