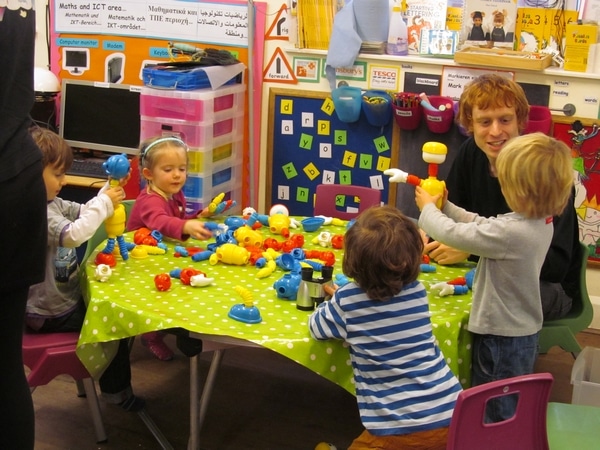 This week the Chimps have been exploring all kinds of different textures, ranging from giant freezing slippery ice balloons in their builders tray to squeezing squishy shaving foam through their fingers and squishing and swirling it all over their table. If those messy activities were not enough they also made seashell prints in flour which was a lot of fun and some hand printing. This week The Howlers were invited to play in the Chimp room a few times which they found very exciting and cozy.

The Howlers had a lot of fun playing with our big selection of new cars and the ‘Happy Valley’ small world set. They were raced around, down slopes, along roads and were very speedy. They also filled their water tray with masses of autumn leaves and made lots of great crunching, scrunching and crinkle sounds with them. They hid toys and tried to find them in the mounds of leaves. During group time the Howlers practiced their very impressive animal sounds together which they found great fun – especially the cow’s moo sound accompanied with the Makaton sign (fingers pretending to be horns on your head) One to try at home.

All week the Baboons have really enjoyed getting involved in their new show and tell sessions at group times. Thanks to all parents/carers for helping us with this by providing favourite toys etc. to talk about. Ebone created an amazing slime concoction that went down really well with all the children that like getting messy (it was certainly very messy and gooey). Sophie, throughout the week has been nursed back to health by the children repeatedly in the role play hospital; she resembled a mummy on many occasions – covered in bandages. In the middle of the week the children became chefs for the afternoon and created some really tasty pizzas from scratch. They were very colourful indeed. The children certainly didn’t scrimp on the vegetables they put on. Ebone and her remaining Baboons at the end of the afternoon whilst it was getting dark lay on their backs whilst they watched and talked about the moon and watched the clouds covering it and revealing it again – very exciting.

The Gorillas have been taking advantage of the blustery weather and collecting autumn leaves to make beautiful collages with. The rain this week also gave the children the chance to wrap up warm and put on their wellington boots and splash around in the puddles. There’s nothing quite like jumping in muddy puddles (pun to Peppa Pig intended). In the classroom the Gorillas have been trialing potential career choices by working in their pretend office, sending important emails on the laptop and writing down messages. We have also been matching letters and shapes to words we recognize and doing lots of letter puzzles. They have been carrying on our eco ethos by checking taps, turning off lights and the computer when they leave the room, recycling paper etc.

The hat shop in the garden has also been a huge hit with everyone in the nursery taking it in turns to try on and buy all of the different hats and role playing all over the place.

The nursery is now a no shoe zone which is working really nicely for everyone and the floors are nicer places to crawl and play on. We are starting to think about Christmas displays and next week the children will be starting to practice their Christmas songs ready to sing for their mummies and daddies on the 13th December. Oh and one last thing a big congratulations to my neice Orla in the Baboons who is now the proud big sister of baby Ruby. Fantastic news. So that’s about it – have a great weekend all!