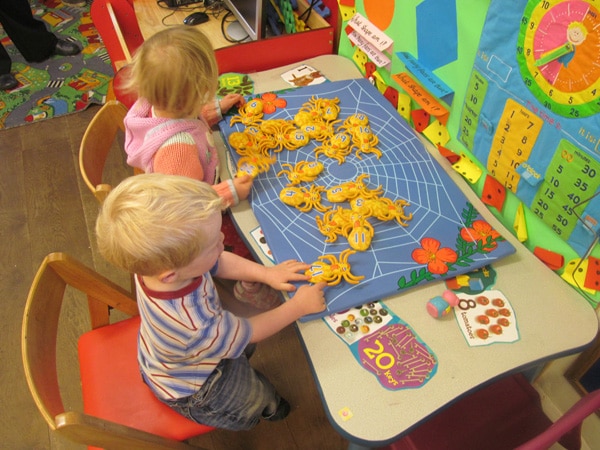 The late Summer has certainly continued this week and the children have been making the most of it in our beautiful garden. For the first time in a little while, the whole nursery has gone on an outing together. We all had a fantastic trip to the park, having lots of fun on all the park equipment.

The Chimps and the Howlers have been spending lots of lovely time together this week. The room has looked really inspiring all week for the children –  they have been getting messy with coloured gloop, pouring and mixing with sticky rice and hunting for hidden sparkly treasure buried in their sand pit. They have also made some beautiful decorated cd’s for their brand new sparkly display.

The Baboons have been very clever this week and have been learning about and mixing their own colours. They have been using vinegar, food colouring and baking soda and made their own colourful bubbles. They also took a grown up trip to the park to collect special things for their new Autumn display and had lots of much fun getting messy and mixing sand with shaving foam.

The Gorillas have used some thought provoking ‘emotions’ posters to identify the different thoughts and feelings that the children in the pictures may have and the different reasons for these. They have used these to make their own new display which looks fantastic. They came up with some really descriptive ideas and communicated them brilliantly. They have also been working together in the ‘Gorilla’ band all week and having lots of fun making some wonderful music. Some of them look like they may turn into rather talented musicians.

Oh and not to forget the arrival of Sizzles the baby bunny who the children adore and have been learning to be really gentle with. She is really inquisitive and brave and seems to really like her new friends so that’s good. The Howlers have some fish – we will soon create a way of putting them at the children’s level it was an unexpected donation so we hadn’t fully prepared for their arrival!

Take care till next week everyone. Have a great weekend!