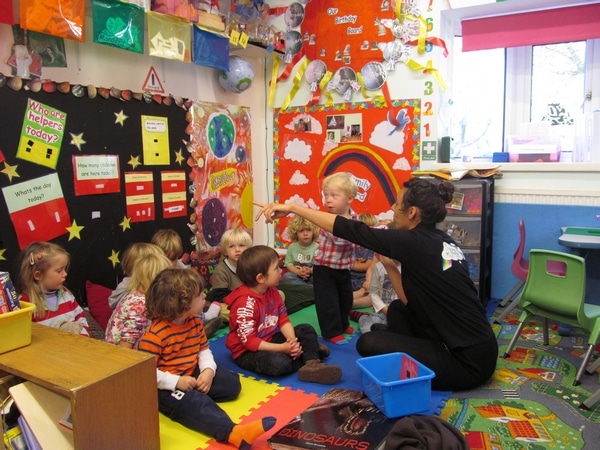 What a fantastic week it has been at Young Friends. Firstly, a big thank you to all the parents who have brought in pumpkins this week for Halloween. It’s going to be a lot of fun using them for lots of different things over the next two weeks.
The Gorillas have gone dinosaur crazy this week with a very prehistoric theme. They had very special chest delivered from the library with fossils, toys, masks and all sorts of fascinating things. They’ve been spelling out dinosaur names with magnetic letters, had their very own museum in the role play and made lots of dino-themed artwork.

The Baboons started the week off with a lovely trip to the beach and seaside play park, making the most of the break from the rain. They’ve had a great exploratory experience this week with different coloured jelly blocks with spaghetti inside (sounds revolting doesn’t it?). The children have also been busy making a creepy crawly papier-mâché spider and using their newly designed and very well equipped mark making area.

The Howlers have been heard all week learning and practicing their numbers at group time. They’ve had counting stories and songs and have done brilliantly. They’ve also been playing in and out of their cosy role play den and have made beautifully colourful and sparkly fish.

The Chimps have been cooking this week and helping to mix and role the ingredients for biscuits. They have also had loads of sensory fun rolling balls around in shaving foam and decorating flowers with glue and glitter.

All of the groups have new music CD’s that they have been dancing and singing along to and they have been checking lights and taps and recycling paper too as we continue to instill our eco friendly ethos.