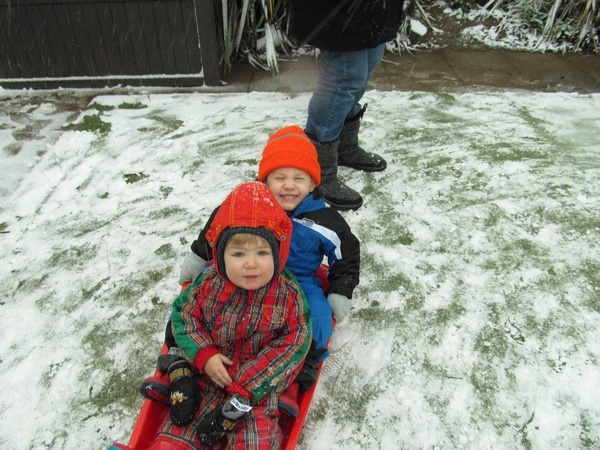 The week began with normal weather conditions and ended in some very excited children on Friday squealing in the garden in the snow. How lovely. So straight to it….

The Gorillas did a lot of savoury cooking this week. They made vegetable burger and also foccaccia bread. they snipped herbs and scattered flour and rolled and patted their creations and had a great time. Clever them. They spotted all sorts of things with their collection of binoculars through the window, in the preschool and in the garden. They also used them to get up close to their giant land snails (which are getting rather big now).They made lots of loud and soft noises with their multiculural instruments and got really involved in their new doctors role play. They have a few new additions to their group and so they welcomed them and had a few cozy group times to make them feel a part of things and talked a lot about feelings and how to make new friends. They also did lots of number and letter activities and practiced holding their pencils correctly.

The Baboons had a really lovely market stall on the go all week. They really enjoyed it and got involved in some really detailed role play. They did some really great music and movement sessions with ribbons and Ebony doing actions for them to copy. Great. They made all sorts of things with playdough that they had made together and practiced cutting with magazines and coloured paper. They are getting really good at their cutting. They made a really outrageous messy mixture out of dye and shaving foam and cornflour and made all sorts of shapes and patterns in it.

Howlers of course looked after their fish which is always a hit with those energetic little people. They did some fantastic string painting and practiced their direction skills rolling balls to eachother along the floor. They were talking a lot about our nursery values using our new posters too – don’t test them but they are definitely getting better at ‘being gentle’ and ‘looking after their toys’. They also did some savoury cooking (cheesy bites_ and did some really wonderful drumming sessions. They also let off some steam with a few really good dances and running about on their blue dance mats.

The chimps did some lovely string paintings. They practiced their makaton signs and are getting good at basic requests through signing. Sweet. They looked through and squashed and felt their squishy oily sensory pads and made their own new sensory bottles which are getting a lot of use. They did singing and clapping along in time (mostly) every day and they also brought the snow indoors which was very exciting.

On Friday the snow came down in buckets and the nursery was a very exciting place. We lost a lot of staff due to buses and trains stopping and so we closed after lunch. But before that the whole nursery had a great time all wrapped up pulling eachother along on our nursery sledges and generally having a really exciting time. we hope you are all having a great weekend and enjoy this weeks pictures………