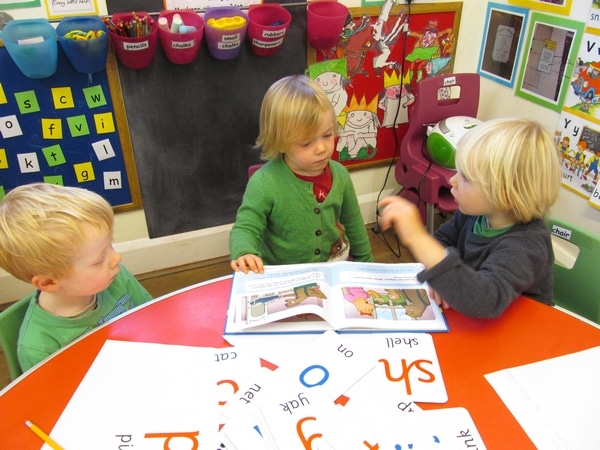 We’ve all had a wonderful time at Young Friends this week, highlighted by our very special visit from the Police on the Tuesday. The children got to meet a real Policeman who showed them lots of exciting pictures of different police vehicles and situations. They were also lucky enough to try on a real uniform hat and vest and were given some great activities to carry on with.

The Gorillas have had a fantastic week in their newly designed Pre-school. We have made a few changes to the learning areas and environment and we all think it is looking better than ever. The Gorillas have also gained a brand new vehicle box full of cars, lorries, planes etc and have loved playing with them. The children have been using their new interactive boards to find and order numbers, letters, shapes and comparing sizes. They have enjoyed playing some new games on the computer, listening to CD stories through headphones and using their role play office complete with laptops and phones.

It’s been an action packed week for the Baboons as always. They’ve all been very creative with colourful and messy cling film paintings, lots of bigger scale junk modeling and decorating their show and tell box. Like the Gorillas, they have also benefitted from a new vehicle box and had the planes out this week. The children have also helped to make their own playdough to use and practiced their typing skills on the keyboards.

The Howlers went on a lovely trip to the train station this week and spotted different trains coming and going. They also stopped off at the park to check out the falling leaves. In the room, the children decorated their new role play gingerbread house and have loved playing in it. At group time they have been using the coloured bears to sort and learn their colours and on the round table they’ve been decorating and making some lovely little sock puppets. It wouldn’t be a week in the Howlers without getting messy so they have also helped to make their own playdough and gloop.

The cheeky Chimps joined the Howlers on the trip to the train station and loved taking in the sights. The nursery has been filled with the lovely smell of baked bread thanks to the Chimps this week as they mixed up the ingredients and made their very own. They had a fantastic foot painting activity where they used their feet to make colourful artwork. They’ve loved using their interactive wall with lots of different things to feel , take off and move around and using their treasure basket full of natural objects.