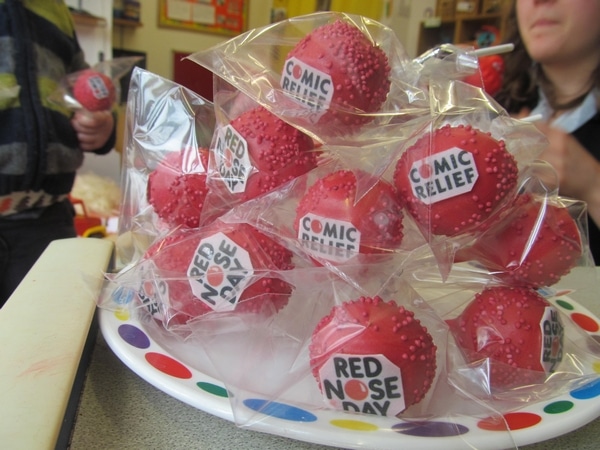 This week was Eco Week and Red Nose Day. It was super busy and full of activities for both. So far we have raised £101.64 through selling cakes and red noses. We will be carrying on selling red noses all week so please take one and pop a pound in the tin in the parent lobby – or more. We need to get rid of them all! Thank you for your support so far we really appreciate it – you have been great and clearly agree that it is a really good cause.

So those lovely little Chimps have been getting down with the natural vibe of the week by playing with compost and pots and driftwood. They have been squishing and squashing and shaping innovative malleable toys made out of soil inside tights! They have been painting objects to make into recycled mobiles and dressing up as minibeasts i.e. ladybirds with antennae and butterflies etc. They have, like the rest of the nursery, been enjoying more garden time than normal as the sun has been out a lot more and they can crawl around and stay dry.

The cheeky Howlers have been making robots out of recycled bits and bobs and they look fantastic! They have been carrying on their waste not want not theme by making puppets out of old socks and loving playing with them. They have been filling, pouring and emptying containers with dry rice and lots of containers and making a right old racket with their musical instruments whilst singing(?) and clapping. They have had a bubbly bath all set up with babies and towels etc in their water tray all week and have been roll playing going to the hair dressers in their new hair salon. Instigated by eco week they have been really going for it talking about recycling their paper and turning off lights and taps too.

The Baboons have been doing their bit for the environment by making up all sorts of games involving, well basically rubbish! They made up a strangely successful game where they scrunched up lots of bits of old paper into balls and got into teams and threw them at eachother for a minute then counted the team with the most. They had so much fun we are considering throwing all our toys away and replacing them with rubbish. They have been checking lights and doors and taps and been learning lots of things about their colour of the week – green (of course). They have been reading their favourite story of the week ‘How I became a Pirate’ and playing in their role play pirate island. They have been making all sorts of monsters and crazy things out of recycled stuff (junk modelling). They enjoyed the responsiblity of turninglights and taps etc. off when they leave the room that they are now going to do it as a matter of everyday course.

Our grown up Gorillas have been making toys to play with out of recycled materials. There is a big truck that they made together, elephants, space ships, animals and aeroplanes. They have been playing with them too and they are holding out. well done them. They made their very own paper and are planning on writing on it when it eventually dries. They have been practicing their washing up skills with cups and plates and crockery and sponges (so there is no excuse at home) in their water tray. they have been doing mark making and practicing their letters and numbers on their big whiteboard and coloured chalks. They have been making fabulous structures with their octons and have been practicing and singing their sound of the week ‘m’ with their jolly phonics tunes. The song involves pretending to be an aeroplane which they rather love. They are getting so good at their letters and loving every minute.