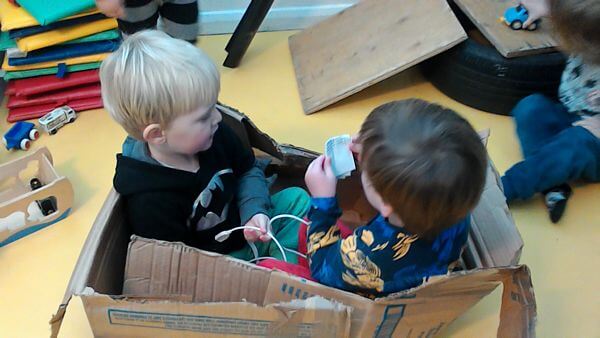 Your little Gibbons played at street art as they took to the walls with spray bottles full of paint. They created a rather colorful splash of art which they all added to throughout the week. ‘Head, Shoulders, Knees and Toes’ brought smiles and movement as the children pointed to their body parts after looking at big pictures of eyes, noses, heads, tummies and toes. The Gibbons also rolled, pulled and prodded piles of salt dough and turned it into keyrings to take home. Afterwards, naturally, they painted and baked them in the oven. The Green Room has had the ‘Sticky Kids’ CD on lively repeat because the Gibbons cannot get enough of bobbing up down and flapping their arms whilst jumping around in the soft play conservatory.

Our not so little Baboons have been creating quite an aroma in the kitchen. They were mixing herbs and spices into a variety of bowls and saucepans whilst talking about what they were making, shouting out “This smells yummy” to the other ‘chefs’ beside them. Pictures of bugs invaded the creative table as children glued down pictures of many different mini-beasts talking about the bug hotel we have been building at the allotment. There was a loud drumming commotion bellowing from the music room whilst the Baboons had their drumming session. They played a stop and go, and loud and soft game where the children followed simple instructions and was learning how to use the instruments in different ways. The Baboons have been continuing to learn the first letter of their names in Makaton as they sang the ‘Tick Tock’ song at group time.

The Gorillas have ‘conkered’ the world this week –  they really hve explored conkers in every way possible! With hundreds of conkers collected from Wilderness Wood (thank you Scarlett and Jude), they spent the week counting how many conkers they could find in the sand tray, making patterns with them on the Reggio table, sorting them into baking trays in the kitchen – they even found their way into a hand bag or too in the role play. Autumn currency no less. The paintbrushes got dipped into a variety of colours to make flags for the nursery ‘Around the World Board’. On the same theme they  looked at photos of all the different flags and used them as inspiration to create their own forms of expressive art. On the math’s table the cars were transformed into number vehicles for our Gorillas to match to the numbered parking space –  “beep beep! We are here, come on, let’s go shopping!” – just one of the phrases that gave the team a little insight into the children’s weekends with you, their loving families!

Tuesday saw the team working hard as hell getting your children’s Nature Kids project off the ground. Immediate plans to be revealed next week and regular children’s visits will resume. There is much work to be done – Autumn is going to be great!