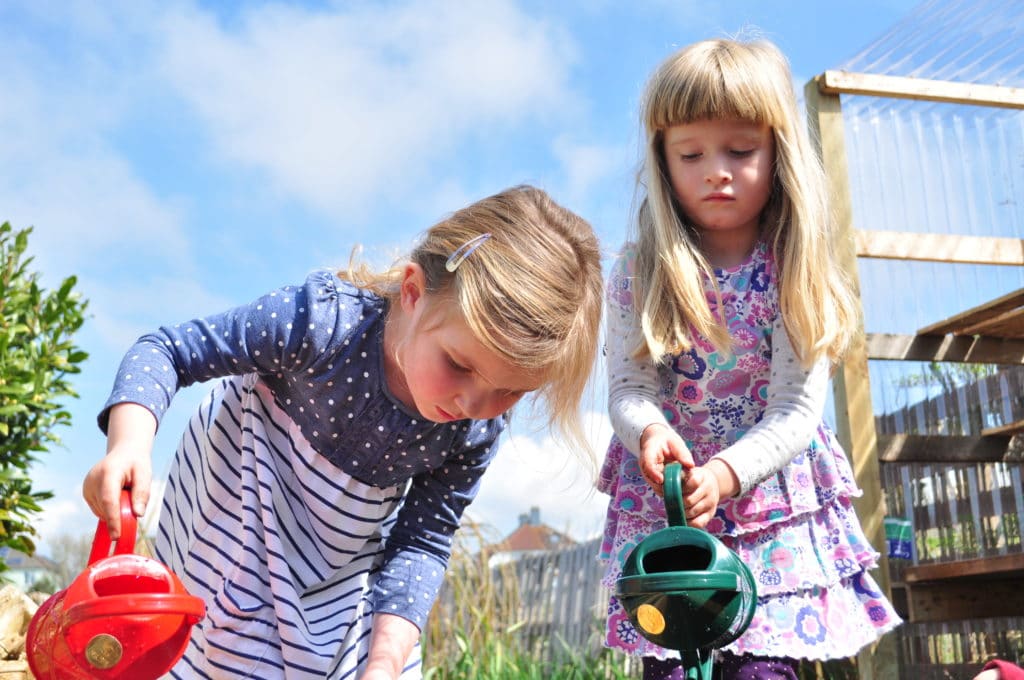 The Gibbons have been unrecognizable this week in their Fancy Dress shop. The team borrowed the Baboon’s costume rack and the Gibbons really enjoyed pulling items of hangers and choosing their outfits. After donning their caps and pulling on their dresses, they sat down for a foamy kitchen experience with their delightful foam dinner with the home corner items. In the small world area was an African animal adventure as the little ones engaged in pretend play as they fed their animals real spring onions. Very thoughtful. Since they have been very animal-focused this week, the Gibbons have also been learning animal Makaton so they can sign their faves with the team. For music and movement, the Gibbons enjoyed a bit of tissue dancing. Don’t know what that is? Well, the little ones would throw their tissue in the air and try to catch them back, which obviously involves a lot of movement as they were all over the room trying to catch those flyaway tissues. They also balanced them on their heads as they spun around, and tried to blow them off their faces into the air. Who knew tissue could be so engaging?

Well for once, the garden wasn’t a soggy mess (for most of the week anyway), so the Baboons practiced wax rubbings around various objects in the garden. Quite a few took a liking to bark, but who wouldn’t? It’s a great texture. Speaking of textures, the Baboons have been enjoying a very calming activity with the dance room materials which focuses on their awareness of their breathing. Laying down, with calming music in the background, the children had a thin layer of material placed over them and they watched as their breath made the material move up and down. I feel like going to sleep just writing about it. Also focusing on self-awareness was their creative activity which had the children creating self portraits from their reflections. For their maths activity, the children had to wait patiently for ice cubes to melt as they revealed their frozen numbers. They also placed ice cubes in powder paint and observed the colours change as the melted ice blended the paints. Irena the Persona Doll stopped by this week to see the Baboons. It’s been a long while since she’s visited so she decided to stick around and help Amy during their afternoon group time and was very excited to see who was crowned Star of the Day. She promised to come back next week as she missed everyone while she was away.

This week, the Gorillas have been celebrating the Hindu New Year and no celebration is complete without good food. The Gorillas got it straight from their very own grocer’s this week in their role play with real vegetables, which they couldn’t help peeling and taking a sneaky chomp. Those will be marked down, of course. In the dance room, Tiziana has been teaching Bollywood dancing and they absolutely loved it. We will most likely make her do this, every week until she leaves. The Gorillas carried on their physical activity in the garden as they played a proper game of football with cone goals. They tried very hard to kick the ball through their goal. All week, they’ve been trying to recognize familiar sounds in the room during their sounds and letters activity and, for phonics, thinking of words that had the ‘er’ sound. As we’re sure you’re all aware, this week we kicked off our trips to the allotment and the children have truly had a blast. The skies were on our side for most of the week and under the sun the children have been planting raspberries, potatoes, putting up our bean poles, and getting to know The Weald community. Peter, Mo, Terry, and Fergus the dog have all loved seeing the Young Friends kids in the allotment getting their growing started and the children, and staff, couldn’t stop smiling. Next week, our second round of allotment trips will start and hopefully the sun will make another week-long appearance for us.