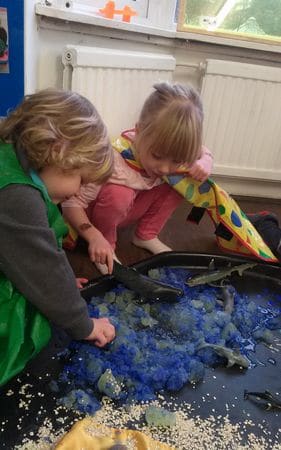 The Chimps have been tearing, stomping and crinkling their way across the chimp room as they’ve had a session of tin foil dancing this week. The small world animals have been hiding in the flour and the children have enjoyed digging through it, making animal sounds, and sprinkling the flour back over them. The construction area has been an assortment of stacking cups and boxes and the Chimps have been finding all manner of uses for them including loudspeakers. For an extra sensory filled painting activity, the children made coffee paint artworks. Facial features have been the topic of focus in the book area and as an added support the Chimps moseyed over to the mirror area to have a good stare at their own reflections. There has been lots of talking as the children have been naming their body parts and practicing their greetings. Speaking of practice, the coloured discovery bags were out for group time to keep those grabby hands at bay and support taking turns as they passed around items from the bags.

It’s domestic domestic bliss in the Howler room with the children preparing meals in the role play kitchen while their baby dolls slept in their cots. In preparation for their cooking next week, the Howlers identified various vegetables from vegetable cards and talked about their favourites, which usually boiled down to either a bleurgh face or a big grin. In the chalkboard area, some of the children have discovered that their marks disappear if they rub them so a great deal of time has been spent marking and erasing. Marking and erasing. The discovery bags are making the rounds and the Howlers have used them to guess what objects are in the bag based on clues like texture and shape. This week on their yoga retreat, the Howlers met Miss Butterfly who whisked them away on a stretching adventure. There has been quite a racket coming from the room while the Howlers borrowed a few pots and pans from the kitchen and had a jam session. In the small world area, the children tried to find some inhabitants to live in the abandoned village of house. They had quite a time determining which residents would fit and which wouldn’t. I think they concluded that Clyde the T-rex was not going to be a suitable neighbour. Poor Clyde.

Numicon has been making its way into various areas of play this week in the Baboon room and there may be some budding mathematicians in our midst. Stay tuned. In the creative area, the children threaded beads and swiped a few numicon shapes to create necklaces. They have also been printing and sorting the numicon shapes throughout the week. The children have been layering various shapes on paper to create their own name rockets. The new favourite book has been Peace at Last all about a daddy bear who can’t get to sleep because everything and everyone is making too much noise and the Baboons all the sounds that keep Mr. Bear awake including the humming fridge and snuffling hedgehog. The dwindling marble supply has been restocked so the marble run was back in action and the Baboons have sorely missed it. They took turns running marbles down the track and concentrated very hard on balancing their structures and finding just the right sized marbles for the job. In the small world area, the dolls have moved back into the dolls’ house and the children have been very particular about where all their furniture is going to go. Interior decorators, perhaps?

The Gorillas have been enjoying some extra special treats this week. First, they got a vast new set of role play food and a trolley. There has been some intense grocery shopping going on as the boys and girls have been looking for all those hard to find items. Our new music and movement room is ever so close to completion. So close, that this week Baby Ballet and Tatty Bumpkin stopped by to give the Gorillas a taster session in dance and yoga in the room. Not only did the children enjoy the sessions, but they were more than a little happy about finally being allowed to enter the room formerly known as the staff cave. Ooooooooh. In keeping with their interest in all things edible, their Italian lesson this week focused on food names. The small world area became an ocean sensory dream as the Gorillas squished the oceany jelly and sifted through the oats, err, sandy shore. In the creative area the children made blow paint monsters, spending time talking about primary and secondary colours as they created their monster painting palettes and then counted out how many eyes they were going to give them.