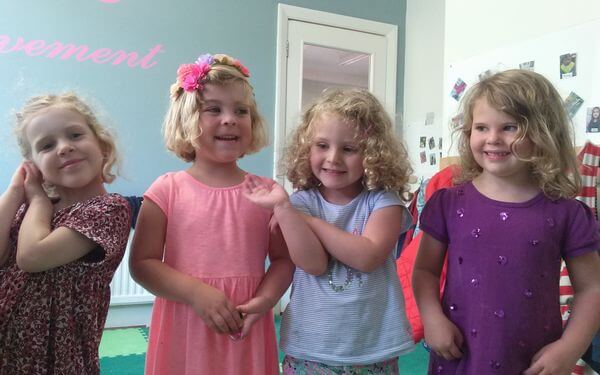 The preschoolers made a right old mess this week printing car tracks… Not only did they go off road and cover a mass of A4 but they also covered a giant sheet of rolling paper too.  Has no-one told these littluns we are trying to look after trees? They chose from a variety of cars with different tyres to bash together collage of different widths and patterns. Weetabix, shreddies and rice crispies have been pulled apart, crushed, squashed and experimented in any way possible then added to many mysterious magical  potions on the Reggio table. Not sure what’s for breakfast now! They have been arranging a plethora of coins and sticks into colours and sizes and measuring a rather lengthy ball of rope by pulling it at each end and seeing how far across the room it would cover. Maths maths maths.

Very seasonal courgettes, carrots, broccoli and potatoes were what our gorgeous little Gibbons used to create some rather wonderful pictures. They also used some of the leaves they had collected from St. Ann’s to stamp, glue and paint on in the Green room. They looked very cute and really rather glamorous as they walked around the White room wearing their shiny necklaces and beads. They had a pretend picnic tea party and were very excited to be joined by ‘Frank’ the frog, ‘Eadie’ the elephant, and ‘Luther’ the Lion. They used their tiny little teacups and saucers, food and napkins and had a jolly good time offering their teddy friends some food.

The Baboons also went on a trip to St Ann’s – they all ventured off and collected some different sized twigs to bring back to nursery. They have been sitting around a (pretend) fire singing songs and drinking tea out of flasks in their camping role play. They pretended to toast marshmallows on twigs and used their table and materials to make a tent.  Must have made them a bit hungry! Around their messy table our brilliant Baboons used a mash of paintbrushes and their finger tips to make lines, circles or any marks they wanted on on our mirrors which were covered with salt. What will they come up with next? The Reggio table had a bowl of mixed dried beans for the Baboons to pour fill and empty into little glass jars.

We apologise for the lack of Baboon photos this week – there appears to be something up with the connection – we will try and get them on later in the week.

Sent from my iPhone