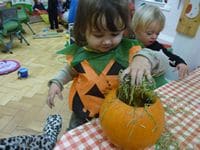 All our groups have gone for it with a really spooky themed experiences and environments this week. We stock piled spooky resources and everyone made brilliant things. We had spooky role plays, spooky cooking, insects galore and some fantastic costumes. Thank you to all of you that donated pumpkins – they certainly didn’t go to waste as you will read. Anyway here goes…

Our fabulous little Chimps have been really focusing on stacking different types of blocks from wooden to plastic to Duplo to soft this week and building them up high with a little support from the team and knocking them back down again. Simple as it sounds we all know babies love a good tower. They tipped black food colouring into their play water this week for a spooky feel and poured and emptied different containers – nice warm water so they didn’t get too cold. They sung lots of old favourite songs with a tonal theme – singing them in different pitches and louder, softer, faster and slower. The Chimps looked a little bemused but it looked and sounded quite funny. They filled their sand tray with spiders and bats for the babies and toddlers to rummage around for, and of course chew and suck which pretty much happens with everything (a lot of sterilising and washing for the poor old grown up Chimps!).They had a row of gouged out pumpkins and they filled them with all manner of different smelling and other sensory stuff like slime and spaghetti and they put their little hands in to feel the textures whilst the team used key words to describe what it might feel like. They did lots of rocking on their see saws, practicing balance and improving their gross motor skills and they danced and wobbled to funky music whilst their grown-ups blew lots of bubbles into the air – a sensory treat for the little ones.

The Cheeky and rather messy gorgeous Howlers did not disappoint this week with many a messy activity to be enjoyed. They did lots of things to do with insects – their chosen Halloween theme. They hunted for insects in their sand tray, also filled with cobwebs. They counted plastic insects from our accurate species in our collection and they compared them to ones they found in reference books (sounds studious and I’m sure it was!). They dressed up as ghosts and made ‘ghostly’ noises and they played with the torches after making really dark dens. Exciting stuff. They built giant structures with the grown-ups with the giant building blocks and they bounced around on their rather lovely bouncy cow. They too went for a bit of pumpkin sensory activity filling, like the Chimps, pumpkins with green rubbery spaghetti, jelly and other such gooey stuff. The team froze insects in coloured ice and the children watched them melt to reveal spiders and flies etc. We are not sure the children really understood that experience but still we plan, carry out and learn that children are very unpredictable! The Howlers made some fantastic Halloween pictures and skeleton collages and some brilliant spiders out of pipe cleaners, lots of messy black paint, googly eyes and plastic cups.

The Bouncing Baboons definitely didn’t scrimp on the Halloween activities either. This group got a bit more into the Halloween dressing up and we had some great outfits all week. They talked about Halloween during group times to make sure they knew what they were doing all week and they read some fun Halloween themed story books. They made lots of things – cheeky looking spiders out of pipe cleaners, egg cups, googly eyes and paint, paper plate spiders webs and erupting snow (not really Halloween but lots of fun all the same). They mixed different coloured water to see what colours were made – they got really immersed and interested in this activity so well done them. They built lots of Duplo structures and looked at number books to practice their numeracy. Some of them are getting brilliant at that (clearly ready for their Gorilla transition). They counted and sorted a massive collection of buttons and counters and they had a role play hospital where they fixed all sorts of wounds and ailments for each other. They also did some Halloween drawings – scary stuff.

Our Gorillas should have entered some sort of dressing up competition this week they were looking so cool. They also did lots of face painting done by the fair hand of Cristina which looked amazing; my child ended up looking like ‘Darth Maul’ (meant to be Spiderman) one day which was a little disturbing but the rest of them looked cute. They had a fantastic bat cave for their role play complete with spiders, bats, mummies and cobwebs which they found very exciting and instigated some really cool scenarios for them to use their wonderful imaginations. They shredded a load of paper and hid spiders and other bugs in there to rummage around and find. They played lots of games of hide and seek with the grown-ups in the garden – there are lots of great places to hide in the Young Friends garden and they had a ball. They talked about Halloween in group time and why and how we celebrate it and they learned lots of spooky key words which they were then able to use throughout the week, especially in their imaginative role play. They also talked through things they find scary and reasoned that they shouldn’t be scared and why. They found some spooky computer games and read ‘Meg and Mog’ in the book corner and at story time. They used their coloured pegs to follow and copy patterns which they did accurately and carefully, clever them. They listened to ‘scary’ sounds on the stereo and guessed what they were really listening hard and they decorated their dolls house with cobwebs and turned it into a Halloween House. They filled black jelly with googly eyes and mushed it about exclaiming at how it felt. They made monsters with their ‘Popoids’ and they made pizza monster faces to take home which were rather tasty. They also made ‘sausage mummies’ which were also rather good. As ever they danced about to their phonics songs whilst the team held up giant letters and did lots of dancing at music and movement time. They also welcomed a new little friend Tilly as only the Gorillas know how who has had a brilliant time and can’t wait to really get to know her lovely new friends.

So there you have it. Another fun and activity filled week at nursery. They will probably need a good old fashioned chill out this weekend to get ready for next week.