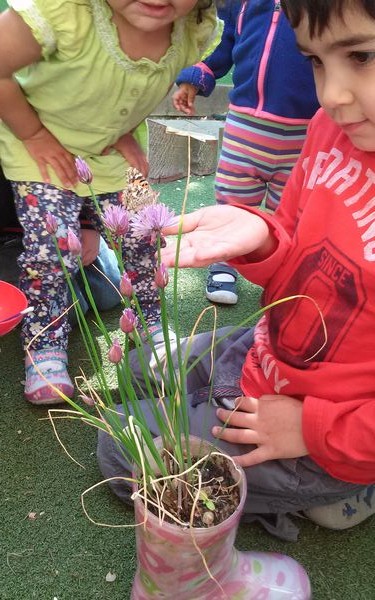 The Chimps have been particularly curious about each other’s toys and objects so their group time focus this week has been a Chimp variation on pass the parcel. With Makaton and role-modelling the little ones have been getting the hang of passing/sharing toys to each other. As we drink so much milk at nursery there are always plenty of empty milk jugs around – so the babies have been using them to practice their pouring hands and work out those wrists in the water tray. Their olfactory senses have been tickled and delighted this week with their sensory play dough, using chilli plants from the vegetable garden and vanilla (a curious combination) for scent. The Chimps also worked out those hand muscles by pushing shapes and objects into the play dough and then trying to pop them back out again. Picking up some pointers from their ‘sharing’ group time, a few of the Chimps were sharing out megablocks and enlisting the help of others to build towers. Some of the children have started toddling through the room on their feet so the pull along toys have been out to give them just that little bit more encouragement. The more physically more competent Chimps took on the ‘hill challenge’ in the garden, following the older children up and even kicking around the footballs a few times. Athletes on the rise methinks.

Watch your head! Construction zone. The Howlers have been doing a little renovating in their room this week in their construction role play. They’ve been sawing wood, drilling holes (don’t tell Louise), and making sure they always wear their hard hats for safety. They’ve also been doing some junk modelling construction with the most popular creation being a car. At their mark making table, the children have been exploring mirror art and painting on top of mirrors which they found utterly fascinating. We apologize if your mirrors at home suffer your child’s newfound artistic inclinations. Their sensory activity was a popping delight as they dived (not literally) into shaving foam full of popping candy and glitter. At the creative table, the Howlers have been preparing their sea-themed display with sponge painting and paper plate sea creatures (octopus, jellyfish, and crabs). The children enjoyed a porta-kitchen at one of the tables with duplo food. They used various colour combinations to create their favourite foods like broccoli. Okay, maybe that was the grownup’s favourite. But they did enjoy trying to make duplo broccoli. The small world tray became a jungle retreat and the animals have been hopping over the crocodile in the river and eating grass and leaves tenderly fed to them by the Howlers. All that nurturing practice with Sizzles is really paying off.

It’s been all about babies this week in the Baboons as they’ve cared for babies in their role play nursery displaying excellent nurturing skills. Obviously, learning from the best. Their babies have been well fed, bathed, and gently rocked to sleep. In the group time area, with all this baby talk, the Baboons have been sharing photos of their families, proudly telling others their family members’ names and talking about their own baby siblings, which some of them could even see in the garden as those sneaky Chimps wandered round. As we were getting rather overloaded with books, the Baboons took a trip to Hove library to return them and along the way they made friends with someone working on the fruit stall who gave them each a cherry, no doubt succumbing to those cute chubby cherubs inching their way towards the produce. These Young Friends children are so used to plucking fruits and vegetables they just couldn’t resist the stall. Now bowling is one of those games that shames many a proud player, but the Baboons were getting strikes all week in their small world bowling alley (no bumpers necessary). They even tested out various balls to determine which ones were the best for knocking all the pins down. The competitive spirit is high in the Baboon room… So are their selling skills as witnessed during the creative activity as the children made ice cream cones with coloured soap flakes and sold them to anyone who would stop by. Apparently those Mr. Whippy’s aren’t getting any cheaper.

This week at camp ,all our campers visited a role play pond and, armed with magnifying glasses. There they explored the pond life and surrounding campsite area. They were a bit concerned that animals weren’t getting enough to drink, so they used bottle caps to take water to them. The Gorillas also made a giant tree for that extra forest feel. At group time the children talked about life cycles and how ours differ to that of plants and trees. They also talked about pollution and noticed how different a polluted sky looks against a clear one. For their Italian lesson this week the Gorillas learned the names for the more exotic variety of wild animals including parrot (papagallo) and polar bear (orso polare). The children even learned the Italian version of “The Lion Sleeps Tonight (Il Leone Si e Addormentato”)” during music and movement. While on the subject of the dance room, their Tatty Bumpkin yoga session focused on a story about differences and the importance of being unique. Kaila the persona doll is getting ready for school, as many of our Gorillas are, and she stopped by to share with everyone her new school bag and talk about all the different things they might do at school when they start. In the writing area, the Gorillas used the Jolly Phonics worksheets to start recognizing and copying letters from their names. Their book this week was “The Lamb that Came for Tea” about a lamb who stops by a wolf’s house for shelter and the wolf’s understandable moral dilemma. It all ended happily as the Gorillas noted that the wolf couldn’t eat the lamb because he had helped it and treated it like family. Awwwww. You may be right Gorillas.

We're so excited that our frogs from last year have revisited so we can teach the children all about the life cycle of a frog, right now the spawn are turning to tadpoles! 🐸

What are you and your family up to this weekend? Tell us in the comments!