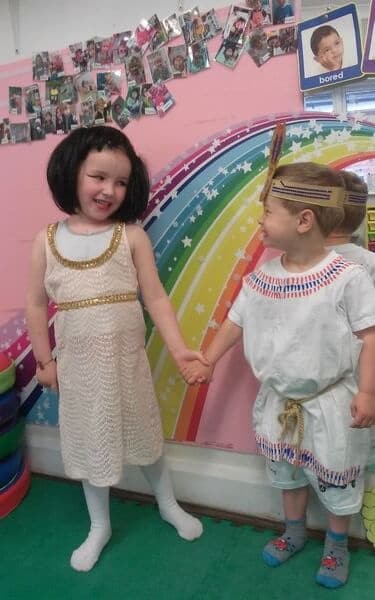 The Gibbons have left no shaker unturned as they rattled their way through their sound box this week. They even made some new shakers using rice, pasta and dried beans which was a big hit with this noisy bunch. Not only did the shakers get a clash, but the little ones even hit the high notes on the recorders and bobbed up and down along with some booming beats on the big drum. The paintbrushes have been a popular resource, painting each other’s toes and faces with water, and exploring their reflections in the giant mirror with paint. Some of the Gibbons rescued many casualties over on the car mat as they echoed the emergency siren around the room.

Our spectacular new water wall and three part water tank in the garden has been an understandably very popular place with the Baboons this week. The jugs have been out along with cups, spoons and almost anything they could find to transport their water around the garden. Inside, they were also pouring rice and flour in cups and bowls and sharing it out in their dining room role play. The little oven has cooked many dishes this week from pastas, to roast dinners and even the odd hat and handbag. The children were able to construct their own small world with all kinds of materials, one being toilet roll which didn’t take long until it was used as a car track for many racing car drivers. Some Baboons have welcomed a new baby in the last couple of weeks so they’ve been reading some books about babies and people who live at home. Some children even spoke about grandparents visiting

The Egyptians stayed for an extra week, and have been hard at work making sarcophagus jars in the pyramid with glue and newspaper. Michael Olden came and spent a morning in the pre-school, bringing along some insects from the Booth museum for the children to examine. He also brought some web material for a “bounce the spider” game and read a rousing book about bugs.The children had such fun as you can see from the photographs. We’ve seen a variety of performances in the preschool with our new microphone. Some children have been belting out the classic ‘Let It Go’ along with many more popular nursery songs, while others danced along and cheered at the end. At the writing table, some have been drawing flowers and learning how to sharpen pencils. Tatty Bumpkin’s pose of the week was the “tree”. The group walked around the room on their tiptoes, and re-enacted many animals they might meet from the jungle.