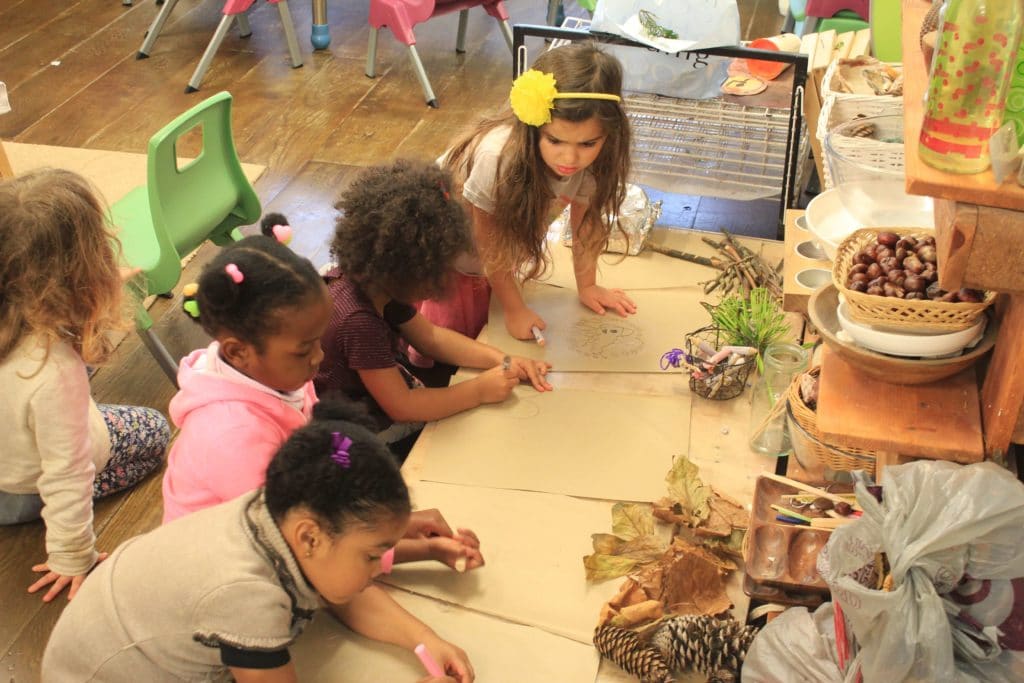 This week saw the start of Switch off Fortnight, which Young Friends threw itself into with gusto. In line with our eco-ethos, we to get involved in this and your children learned more about saving energy, recycling and doing our bit to look after the planet. Anyway here is last week’s news…

While the team thought the Gibbons would enjoy having pasta in their role play area, it would seem they were far more interested in getting a band together and exploring sound with kitchen utensils. The little ones were sound checking all over the White Room as they tapped, banged, and drummed onto various objects and materials. Some of the children even made cymbals with a pair of spoons (holding one in each hand and then bringing them together). The little ones have been practicing their new and improved “Hello” song, incorporating the different languages of the Gibbons children. They have also been enjoying tunnels and ramps in the small world tray, practicing their sharing skills and words like “up,” “down,” and “push.” All three groups this week were treated to a special shadow puppet show about a boy named Max who always wanted to go to the moon. The children were all very pleased to see that he made it there in the end.

The Baboons have been ever so excited as we restocked our car supply this week. They’ve been constructing roads and tunnels, zooming up and down ramps, and generally Grand Prixing their way around the room. They drove their cars over to the small world farm, helping the locals build barns for their animals. To keep all those little fingers busy when they weren’t grabbing cars, the Baboons have been exploring ICT objects: phoning home, changing the tv channel with remotes, and making calculations on the calculators. For their creative activity, the Baboons created some nature art (sticks and leaves) on tracing paper so that when the sun is shining they can observe the shadows. Oooooooh. While we’re on the topic of shadows, the Baboons have also been watching dinosaur shadows with torches. In the dance room, the children stretched out their limbs to some yoga, doing some of those familiar poses such as tree and some not so familiar ones…like flamingo.

The Gorillas have also been exploring all aspects of shadows this week – kicking off with some shadow tracing using different objects from their room. The children also created a nature collage, spending time talking about light and shadow. In their small world area, the Gorillas have been meeting extra-terrestrials on the moon. They even made a few rockets to get their small world people there. Their cooking activity was very tasty onion bhajis. The Gorillas chopped onions, measured flour and spices, and moulded their ingredients together – all the time talking about the smells and textures and practicing the names of the equipment they were using. They were also very keen to share with each other the kinds of meals they make at home. The Bee-Bots are back in action and the Gorillas have been loving control where they move around the room. If you’re not sure what the Bee-Bots are, they’re an ICT resource in the shape of a bee – the children push buttons to make them go right, left, backwards, or forwards. Depending on how many times they push the buttons, the Bee-Bot will keep moving until their sequence has finished. A great resource for developing ICT and Maths skills.

We are looking for a highly qualified Nursery Manager with a passion for the outdoors and sustainability!

Download our application form, fill it out and send it to enquiries@youngfriends.co.uk

Happy Saturday! 🌻 We'll be feeding the birds today! 🐦
What are you and your family up to this weekend? Comment below! 👇 #YoungFriendsNatureNursery

Happy Saturday! 🌻⁠ ⁠ We'll be feeding the b

We are looking for a highly qualified Nursery Mana

Our latest Outdoor Chronicles blog is all about th

One of the best things about Young Friends is our

A lovely #TuesdayTestimonial for you from one of o

This is our Make and Do table in our lovely conser

Here's Alex with a Kitchen Garden Update for you f

Are you or someone you know a highly qualified Nur

Why are the boxes always more fun than the thing t