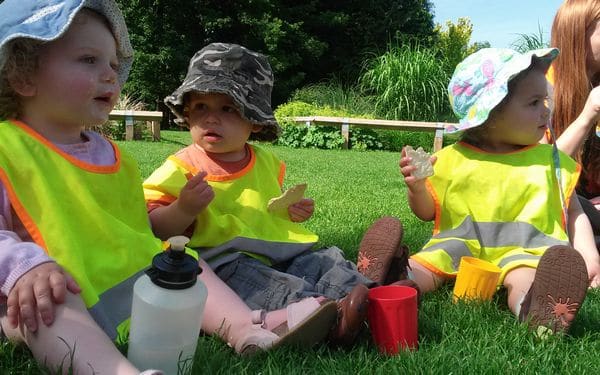 This week our Chimps have been playing with musical instruments in the conservatory. They loved the piano, the guitar and crashed the life out of those tambourines! They had lots of different shaped and sized ice cubes in water and touched them and listened to words about temperature, feeling and were fascinated as they watched them melt. They also had different coloured play dough wrapped in tin foil that they had to unwrap and find – the babies really enjoyed peeling the foil off the play dough and squidging it around. They pressed buttons galore on the keyboards and ICT computers and they investigated lots of different natural objects that they had found on the beach. They did some patterns with their giant egg crayons but then decided it would be more enjoyable to bash them together and listen to the sounds – fair enough. They helped to hang clothes on their role play washing line and wash them in bubbles and water which was lovely and cooling on such a hot day. They investigated and with help sorted our coloured counting bears and the team created a challenging obstacle course in the garden which they helped them to travel along. They went to the park and had a lovely time reading stories, playing with balls and having a picnic. They got a new ball pit at the end of the week and they loved sitting in it and playing with the hundreds of balls – as did the rest of the children in the garden!

The Howlers talked a lot about being kind and gentle this week. They used babies to demonstrate. They are repeating this activity a lot at the moment because they really enjoy it respond so well – it is great for their behaviour and positive reinforcement as they refer to it throughout the rest of the day. They had different coloured water out in their water boxes and filled and decanted till their hearts content. They used the bases of bottles and the lids to make lovely prints. They really enjoyed this as the bottles were the perfect size for their little hands. They played with coloured cooked spaghetti and the kitchen set, pretending to make meals and drinks for each other and the team. They played with the marble run and squealed and giggled as they dropped the marbles and watched them fall down the shoots. They played with the pop up and wind-up toys and they enjoyed pressing the buttons and watching what popped up. They did a sweet and sour fruit tasting activity and were saying the right words for the taste with a little help. They played with the doll’s house and made the dolls do self care things like go to the toilet and wash their faces and hands – sweet. They did animal actions when the relevant flash cards were held up – those Howlers just love pretending to be animals! They went to the beach for a lovely Friday outing in the sunshine and had a lovely time throwing pebbles into the sea and having a lovely picnic. They also did some rather beautiful ice painting. Busy little Howlers.

The Baboons used the sand and tea set to have a very sandy tea party. They made some crazy looking balloon heads consisting of sand, balloons, googly eyes and feathers. Brilliant. They made slime out of basil seeds, cornflour, water and powder paint – a weird and wonderful texture that they (and the staff) loved investigating. They made a chalk rainbow and played a version of hopscotch on it hopping from colour to colour. They did controlled ribbon dancing with ribbons and music and copied the actions demonstrated by the team. They did some messy string painting and they built their own train track and played with the selection of trains. They had the selection of calculators out all week and pretending to do calculations and use them as phones. They made ‘blow paint bugs’ and blew the dripping paint around the paper and used googly eyes for the bug faces. They read ‘Kisses For Daddy’ and listened really well as they found out how the different animals kiss each other. They watered the vegetable patch and did an obstacle course in the garden. Lovely.

Our Gorillas this week talked about and read books about how to be kind to each other and the reasons why it is so important. They poured water into sand and used moulds to create different shapes in lines around the sand. They had the sea creatures in their small world area with materials for the ocean etc. – they really enjoyed acting out little ocean scenes. They furthered this activity by watching clips of sea creature documentaries and are now so knowledgeable they could probably make their own! They did lovely under the sea collages with cake cases and acetate and other materials and they look just lovely. They had a rather impressive (well done Sophie) pirate ship in their role play area with other pirate paraphernalia like little telescopes, eye patches, treasure, hats and pouches for the treasure. They counted with the pirate treasure and sorted them into sizes. They practised their letters with their flash cards and tracing and they recognised lots of the letters. They did forward rolls and other acrobatics on the mats outside and they danced around and copied the actions (and made up new ones) to their ‘Sticky Kids’ CD’s. They also did some crazy looking mini pizzas in the shape of the theme of the week – fish!

The nursery got a beautiful new parasol to shade the children this week and it provides a perfect area for them to play out of the sun.

Who needs plastic when we have wheelbarrows!?
#YoungFriendsNurseryHove