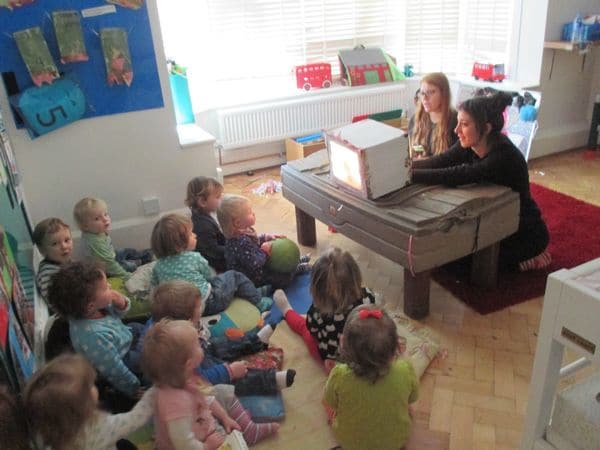 Our rather fabulous Chimps have been doing so much this week I am surprised they have been able to keep up. To begin with they have had a house to sit and hide and read and sing in made out of giant blocks. Wonderful. They have been doing a bit of science by working out how to twist lids and link and thread and fit things inside each other during some brilliantly focused heuristic play sessions. They have been wobbling and smiling and clapping along to their baby boogie music and they have been tasting all sorts of fruit and using it to make tantalising smoothies. They spread paper all over the floor and did some squidgy feet and hand painting and they also carried on the food theme by playing with slimy spaghetti. They have been playing with their spinning schema box. The groups have several boxes like this and they are inspired by patterns in play for individual children that have been noticed during observations Please click here for more information on schema play.

Our Baboons have been playing with dinosaurs all week – they have been making marks in sand with their tails and the dinosaurs have been chasing each other about and eating leaves etc. On their mark making table they have been colouring in Peppa Pig and drawing pirates. They have been making masks and role playing with them making all sorts of pirate noises. They have been singing pirate themed songs and jumping ‘This Way and That’ (that is part of the song) and making their own pirate ‘accessories’ with playdough like gold coins, caves and flags etc. They enjoyed using our large collection of stamps and printing with stamps and different shaped and sized blocks. They buried ‘treasure’ in sand and the team helped them find it again – causing much screeching with joy. The Baboons have made sure they have not missed out on exercise with the lack of the garden and have been out on several trips to the park and walks around the block. But inside they have been doing lots of exercise too with our Sticky Kids collection. Click here to find out more about Sticky Kids but it is a really great way for groups of children with adult support to practice copying moves and really excerpt themselves to good direction and funky music – I have yet to meet a child that doesn’t love it. The Baboons have been practicing their Makaton signing and have a lovely new Makaton board Please click here to read a good description of the benefits of Makaton in case you are unsure. The Baboons have been playing Dominos for a bit of maths/problem solving this week and have been making paper faces in the construction area – clever.

The Gorillas have also been on a few walks out of the setting and have been to the park a couple of times too. They have been talking about Makaton and learning the symbols and actions and have been loving it as much as, if not more, than the younger children. They went on a really lovely outing to the Emporium to see and play with Miller Goodman’s amazing wooden toy collection. Then they went to have a picnic at the park. They have been pretending to be different family members in their ‘Home’ corner and they made some totally fantastic ‘Potato Boats’ in their cooking activity. They were beautiful and feature in this weeks’ photos of course. We put up a new very long magnet board this week in their maths area and gave the Gorillas lots of lovely new magnetic letters and numbers. They all went crazy for it – there is enough room for quite a few children to play on it at once which is nice. Ellie made a wonderful number and letter line across the whole thing and was very proud. They used ice with sticks frozen into it as crayons with paint and they produced some beautiful bits of artwork – they will do this again next week as they loved it so much. They also went crazy for lots of the Sticky Kids CDs and used the whole of the Gorilla space to get lots of exercise.

The build is going brilliantly and coming on really fast and the nursery will have its beautiful garden back plus lovely new spaces very soon. It’s all on track thank goodness. The rain has done nothing to deter our hard working builders and everyone is excited because they can see what great additions to the nursery they are going to be. Have a fabulous weekend everyone!