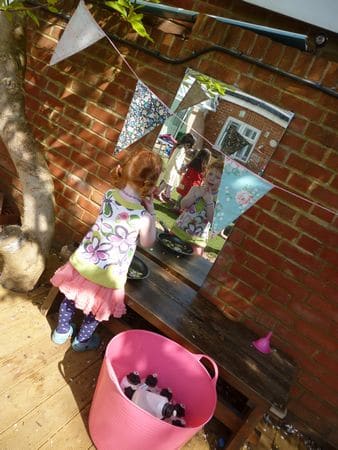 Our lovely Chimps this week read and did the actions to their ‘Eyes, Nose and Cheeky Chin’ book which they had a lot of fun with. They played with jelly and squidged it around and felt it crumble in their fingers whilst the staff taught them related words. They played with their fans and laughed when it created a cool wind. They built some impressive towers with their mega blocks and learnt a little more about colours when they did them, making red towers then blue ones etc. They turned flour into paint and made textured paintings on black paper. The babies have been looking at lots of books about animals and the girls have been doing animal noises and actions with them. Then they picked the animals they had been pretending to be out of the soft farm. Clever. They have been mountaineering up the big hill (well it’s big to them) at the back of the garden and rolled around on it. They have been practicing using all their pop up toys and they played with instruments and rockers in their conservatory. Next week their outside soft play area is being delivered and they will be able to sit outside their French doors in splendid comfort with all their Chimp toys – the poshest babies in town no less.

Our Howlers this week have been without Irene who has been in Italy visiting her family. However this has not stopped the fun. They have been making some rather lovely bird masks with plates and feathers – they enjoyed playing with the feathers the most and tickling each other but as long as they had fun.. They made some play dough together and got good use out of that and they made towers out of mega blocks and knocked them all down again. They had the telephones out and pretended to make all sorts of phone calls, both social and emergency. They had lots of puzzles out which they did and used to point out and name the different pictures in them – particularly enjoying the rainbow which instigated singing the rainbow song. They had some lovely dancing sessions and they made healthy vegetable kebabs – they practiced their cutting and carefully threaded the vegetables onto the skewers. They made a fabulous sand and rock garden (inspired by Japan – those Howlers are very cultured you know) and they talked all about the vegetables we are going to grow in our new vegetable patch.

Our very active Baboons this week talked a lot about Spring in their group times – they discussed growing vegetables and fruit and flowers, baby animals and the weather. They talked about visits to farms that they had made with their families and what they saw there. They used paint brushes and water to make patterns on walls outside and on the blackboard in the Baboon room. They made patterns, let them dry and made more – hours of fun. They made pretty stained glass windows to decorate their conservatory and they did leaf painting too. They used wooden blocks to make enclosures for their animals and dinosaurs which were a part of their dinosaur village. They had a garden centre for their role play with pots and spades and pictures of plants with much more. They have been looking at the symbols on the back of seed packets and working out by chosing signs which plants need full, partial or no sun and the same for the amount of water – good practice for all the planting we are going to do soon. They played with the bats and balls to develop their hand/eye coordination and they played a lovely game with Ebone called ‘trash ball’ where they throw balls of paper to each other and try to catch them. They practiced counting skills with this which they were rather good at.

The Gorillas had a healthy food and cooking-based week because they were doing more for the Sainsbury’s Active Kids ‘Mini Chef Award’. This is an initiative set up to promote cooking skills and developing healthy ways of life, which of course Young Friends believes passionately in. The children talked about healthy foods and what is not good for you and they gave their parents many a lecture at home (if my house was anything to go by). They played games with the Numicon set burying the shapes and finding and identifying the amounts. They also did Numicon shape printing – they counted the dots of the shapes they had made – educational and pretty at the same time! They made different fruits with colourful playdough and talked about how they taste, what they look like and where they grow. They did lots of fun and educational things on their computer – they are getting really good at their mouse skills. They had a sensory time with their shaving foam and flour which was rather a messy thing and they played with their babies and paraphernalia in the home corner. They did lots of Sticky Kids music and movement which they absolutely loved and they also played musical bumps – they are clearly going to a lot of parties as they were all very competitive and clued up. They used rulers and stencils on their writing table and their control is just great. They read ‘Winston Is Worried’ which is rather a funny story about a hypochondriac dog with a splinter. They talked about what all the funny bits meant.

We are all planning our growing, headed by Caz and myself, and our new vegetable patch and we can’t wait to see your little ones pottering about with trowels. We are planning what we will grow and which groups will do what. Exciting. We are also about to enter an event for Brighton Fringe Festival – The Hanging Gardens of Brighton’, organised by my good friend Dawn Banks, landscape designer. We will be including the children in making a miniature garden for an installation in Jubilee Square on May 24th. Click here to take a look at what it is about. We will keep you posted on that. We have also purchased a set of six proper tennis rackets and lots of balls which will be out next week – we are going to have some brilliant little tennis players on our hands in no time we are sure.