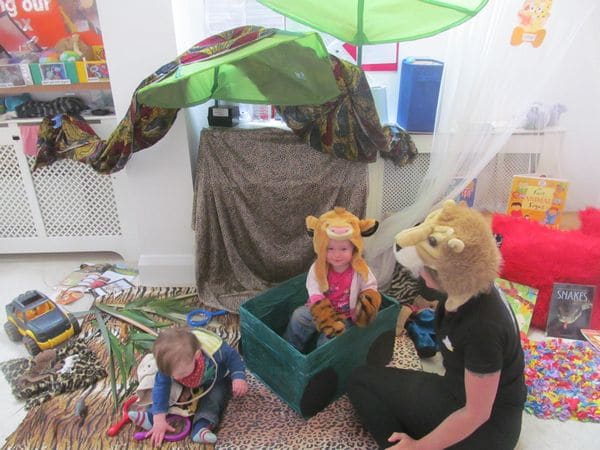 It’s been a super week at Young Friends with an amazing set of fun filled and educational activities, with the role play areas stealing the show. We’ve had ‘Pirate Ships’, ‘Jungle Safaris’ and ‘Camp Sites’. Children have been coming in dressed up to get even more immersed in their role play areas and the fun really has been non stop each and every day.

The Gorillas have gone Pirate mad this week with their very own Pirate Ship Role play. They have had eye patches, costumes, a boat and pretend sea, telescopes, pirate music and games, hats and cutlasses and much more. They have learnt and practiced singing some special Pirate songs with actions and Christina has told a fantastic Pirate story all week which the children have been amazed by. It didn’t stop there, the children have also been creating flags with junk modelling, writing secret letters and messages to send off in bottles and they even had an extra special package arrive from real life Pirates with a flag, cutlasses, telescopes and eye patches. Aside from all of that the clever Preschoolers have been practicing their double ‘ee’ phonic sound, exploring floating and sinking in the water tray and talking about family with their Persona Doll.

The Baboons have been up to their usual exploring and investigating this week. They took part in a fascinating  experiment watching coloured ice marbles melt and observing how the food colouring runs over the table. On a similar theme they also made some amazing art work by blowing paint through straws and letting it splat on paper. The 2 year olds have had a wonderful role play area this week which was set up as a camp site with a fire to toast marshmellows, a tent, sleeping bags, torches and more. Around the room the children have also drawn their families faces, talking about how they look and used our small world hospital to look after poorly figures.

The Howlers have outdone themselves this week by creating some absolutely beautiful artwork. They chose their favourite stencils and painted over them in various colours making some really lovely pictures for a new display. Like all groups the little ones have been busy making some lovely Father’s Day cards by decorating card and sticking their own photo on the front as a big thank you to those Dads. Both in and out of the garden we’ve been playing ball rolling games and practicing each others names and for Group time we have been exploring our colour bags and passing the coloured objects. Somehow the lucky children have also managed to find time for spinning their cogs and wheels, having a special Teddy bears picnic and washing clothes in their launderette role play. They also had a great time with our atmospheric light box exploring the sounds and lights in the Gorilla dark room. Phew.

The Chimp room has been transformed into a super jungle safari this week, complete with animals, animal print materials and a giant jungle leaf canapé – very atmospheric. They’ve even had their own jeep to play in, hats and clothes to try on and even binoculars to spot all of the different safari animals laid out over the room. At the messy table they little ones have been busy painting toilet rolls and making their own binoculars and mixing colouring with bubble mix to create bubble paintings. We’ve been practicing our stacking cups on the rug and have been getting very good at it and have also got the chance to play in the ball pit which we brought into the room.

N.B. As you may or may not have noticed there are now going to be a few links within the blogs. These will point you to various articles that are relevant to the experience/activity that is being referred to in the blog. Everything we do at nursery has a point and many planned experiences focus on a particular area of development and incorporate different techniques. Much of this is really interesting and we have decided to do this as many of you ask about certain techniques that we employ. We hope you will find them interesting.

Have a great weekend everyone.