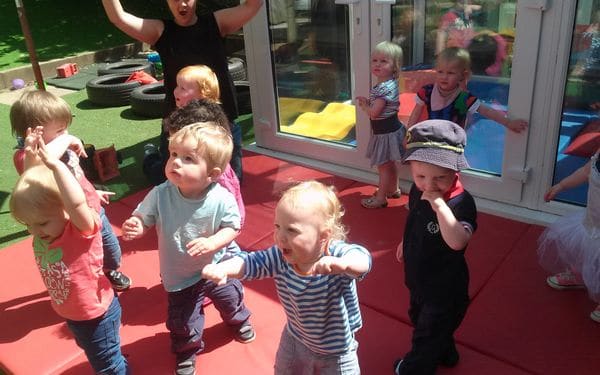 Our little Chimps practised tidying all the activities up all week that they had out whilst singing the tidy up song.They did an activity where they laid out lots of different objects with different weights, textures and made with different materials and bashed them together to listen to the different sounds they make. They made some lovely instruments with milk bottles, rice and coloured paper and the children were enjoying this so much that the team improvised and made other instruments with different materials too. They put lots of different animals in water and giggled as they fished around for them making the different animal noises and cooling themselves down at the same time. They made crowns and other constructions with the rainbow rings – though they actually enjoyed transporting the colourful objects from one part of the room to the other more than making things with them! They had the tunnel out all week and played peek-a-boo as they crawled through it and they painted with balls – rolling them in the paint and them over different coloured paper. They had a lovely session of baby yoga which they adored – copying swaying motions etc.

Our Howlers this week had sand out with different containers and immersed themselves in filling, pouring emptying and transferring whilst learning the related words. They started learning about the letter ‘S’ and enjoyed making the sound over and over again whilst tracing the letters over and again. They pretended to be snakes to relate to this activity too. They made some lovely paintings with the soles of Wellington boots and painted lovely pictures with rainbow coloured shaving foam (they added colouring to it). They made salt dough vegetables whilst looking at the real thing – obviously the team helped them but they seemed to understand what they had made and then chose the right colours to paint them with. They read ‘Guess How Much I Love You’ and they made animal footprints whilst making the sounds of the animals – a very noisy and educational printing experience! They did lots of two-piece puzzles and did some dancing whilst throwing and ‘catching’ bean bags at the same time. On Friday they went to the park and played ball games and had a picnic in the sunshine and earlier in the week they went to the beach for a picnic and from the look of the photos had a lovely (and quite windy) time in the sunshine. They also practiced cleaning their teeth at grouptime!

The Baboons looked at pictures of people doing all sorts of different occupations and guessed what they were doing. They did a brilliant floating and sinking activity with some cork boats and Perspex containers that were donated by a children’s equipment company – all the groups will be able to use these as they can be adapted to each age group. Paulina prepared a lovely butterfly activity at home and brought it in and it was worth her trouble as the children were really proud of their beautiful butterflies. They made paper plate animals with feathers and wiggly eyes and they spent lots of time building enclosures for dolls house people with Lego. They used the pop up interactive toys and talked about what was going to pop up, what colours they were and the older Baboons were teaching the younger ones what to do – sweet. They used felt tip pens to do some stencil pictures and colour them in. They had a doctor’s surgery out in the role play area and they had a vast collection of bottle tops that they used for a very educational sorting activity. They got very good at controlling their own bubble wands to make their own giant bubbles aad they played some lovely games of ‘Sandy Girl/Boy’ during which they all joined in brilliantly singing, dancing and taking turns.

The Gorillas have been talking about the sea and sea animals and looking at pictures and videos. They also had hidden treasure in the sand and they loved burying the treasure and finding and counting how much they have. They did hand paint and as ever enjoyed squishing the paint all over their hands and making dainty little finger prints. They made some lovely Father’s Day cards ready for the weekend and they made pirate hats with black paper, white paint and glitter – they were particularly good at cutting out the shapes themselves. They made a house out of the giant blocks in the garden and played games all about living in it. They had an array of magnets and marvelled at what they could pick up and transport to other areas in the room and they had the car collection out which they drove up and down ramps and around the toy buildings. They read the baby owl story and talked about owls, pretended to be owls and make owl noises. They played number games with our Numicon set and made patterns out of the pieces. They had running races in the garden and were particularly fast and they did a singing activity where they had to copy and change their tones and voices.