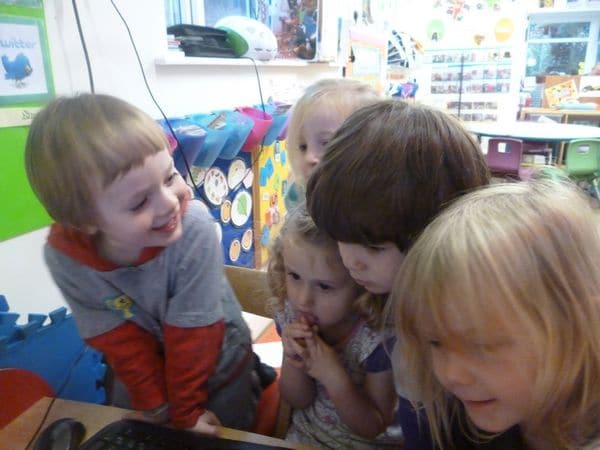 Our lovely Chimps have been practicing walking with their baby walkers and toppling over and trying again. They have been developing hand eye coordination by sitting in a circle and rolling balls to each other and down their half pipes. They have been hiding bugs (and frozen gloves!) in their sand pit and squishing and squashing frozen jelly cubes into different shapes and feeling how cold they are. They have been investigating all sorts of textures with their hands inside their sensory bags and been making colourful marks with lolly sticks. They have had their own puppet theatre up all week and the Chimp team have been doing fun puppet shows to make the babies giggle. They have also been looking at their rather beautiful faces in their mirror mat and crawling across it and giving themselves kisses!

The Howlers have been making their own witches hats in preparation for next week out of cones of paper decorated with glue and paint mixed with glitter and shredded tissue paper for hair! They have been building walls in the garden with giant bricks and have had several heuristic play sessions (if anyone has any plastic bottles, boxes, rolling pins, spoons, corks or any other everyday objects they could donate for the heuristic play collection they would be greatly appreciated – you wouldn’t believe the educational value they can have!). They have been playing with their abacuses and having a lovely time playing sleeping bunnies. Mimi has been singing Twinkle Twinkle Little Star in Turkish for them and they have been really enjoying it.

Our scientific Baboons have been looking at books about and learning all about germs and hygiene. They have been looking at pictures of and learning all about hospitals and why we might go there. They have been doing some very expressive ribbon dancing and doing some very careful magnet fishing. They have had a small world building site which they built on throughout the week, no pun intended. They had wet sand in their sand tray to make shapes and mountains and they did some impressive autumn coloured printing pictures. Not to disappoint us on the scientific side of things the Baboons also made erupting snow!

There seemed to be an air of calm in the Gorillas this week. They all seemed really focused, polite and interactive. From the office it looked and sounded terrific. They did so many things – they made some lovely hot air balloons out of shiny blue balloons and paper cups. They did lots of action games in the garden which they really enjoyed. They practiced holding their pencils correctly and they had some brilliant show and tell sessions as ever. They did lots of phonics songs and they made some amazing symmetrical patterns out of their new rainbow pegs and boards. They had a great couple of dark room/light box sessions which they got really immersed in and they listened to some Dr Seuss stories at rest time. Most of the Gorillas spent all week sitting proudly on the rainbow (not literally) and they even had a few tango sessions with Cristina and Irene. Their role play has been a travel agent and they have been selling some rather impressive holidays to each other and looking at the globe and maps to see where they are.

So another week has zipped by and next week is Halloween which the team have been planning some amazing activities for as ever. The Gorilla bat caves is being erected as I write this – they are going to love it. Watch this space…..