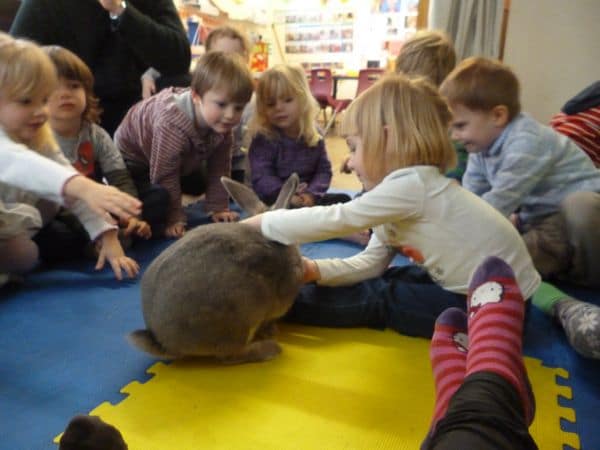 Our Chimps this week have been playing with sand, water, funnels and wooden implements in their sand tray. They splashed and scooped and filled up containers over and again and had a whale of a time. They also used all different shaped sponges in a bumper sponge painting activity that went on for ages because they just didn’t want to stop. They made some lovely pasta necklaces after painting the pasta all different colours – they all enjoyed different parts of this activity but all got something out of it! They filled the room with big vehicles and loved putting their toys in the diggers and pushing them around. The girls set up the rainbow cog wheels and the children loved spinning them and watching the different patterns and colours move. They also made balloon rattles and loved shaking them and making different sounds. Their role play was a beach scene this week and they played with inflatables and even tried on swimming costumes and looked at themselves in the mirror! They did lots of wooden peg puzzles which they were rather good at and practiced their physical skills at all their different levels – Reuben even took some steps on his own. The children did lots of music and movement sessions, went to the park and rolled balls around the tennis courts, took a stroll to the beach and did some lovely baby yoga.

Our Howler children did some really lovely junk modelling this week – they cut and stuck different shapes together and used A LOT of glue! They listened to our catchy phonics music and tried to copy some actions. They went to the park this week and rolled lots of different balls, including sensory balls, around the tennis courts. They also went on a lovely sunny trip to the beach – so they got lots of fresh air despite the garden being temporarily out of bounds. They did even more artwork by flicking different coloured paint onto paper. The babies played with our pretend laptops and loved pressing all the buttons and they got very animated whilst they role played with different animal toys. They played our ‘Sticky Kids’ ‘Wiggle and Jiggle’ CD and loved doing actions to the different tunes and the team got very animated which was lovely. They also dressed up with lots of different hats and bags and pretended to go out to work – they looked rather cute. They also did a lot more action games and climbing around on their slide.

Our Baboons got out the parachute and got very excited whilst playing with it as of course they should. They learnt Makaton signing for all sorts of different animals which they really enjoyed. They used ‘quick sand’ to demonstrate floating and sinking – they found this fascinating. They made ‘birds nest’ collages and loved spreading the glue onto paper. The Baboons love a pirate activity and this week they were not let down as they looked at treasure maps and through telescopes and saying ‘Aye Aye Captain’ A LOT! They played with dominoes – not properly – they used them to make constructions and knocked them down again. The Baboons went to do small group activities and draw on the chalk board and play with Lego in the outside classroom and had really focused times in there. They had a lovely time in the park playing ball games and on the swings and other equipment. They loved going on the slide the most. They also had some brilliant games of ‘Musical Statues’.

The role playing these week coming from the Gorillas was out of this world. They spent a good deal of the week playing in small groups confidently pretending to be all sorts of things – it sounded lovely. They did lots of physical ‘Sticky Kids’ activities. They just can’t get enough of these. They had some lovely circle times when they talked about the pets they have and why they love them, the different things they eat and do. Their sand tray was full of different cups and buckets and spades and they became immersed for extended periods of time. They made paper chains out of painted cut paper and pretended they were hoopla necklaces. We had to take our old bunting down – because it was old and faded (but also because it might set off our burglar alarm flapping about in the night!) so they used the paper to make a fabulous giant rainbow. Lovely. They had lots of different animals and a computer and different beds and carrying containers etc. in their role play pet shop which as ever was detailed and inspiring. They went on a brilliant bear hunt around the whole nursery and went to the park numerous times and played different group games. They took a variety of different balls, including a great selection of basket balls, to the tennis courts and had so much fun they did it again later in the week. They ran and bounced them to each other and showed some really good skills. They played in intricate detail with their dolls house, furniture and dolls and played with water, shells and sand in the sand tray using the shells to shovel sand into small containers – this was not the planned intention but of course those resourceful Gorillas always find their own interpretation of activities. They learnt more about numbers and letter with their new magnet board which hasn’t yet lost its novelty value.

All of the groups gave Sizzles, our rabbit, lots of attention this week as he has been a little lonely without any garden action. He came inside on a few occassions and loved getting some much missed cuddles and snacks. We also introduced gently, just in the Gorillas and a little bit in the Baboons, our new online observation system. It has been a roaring success and we will be introducing it to all the groups next week so look out for your passwords and email alerts – though please don’t expect them all at once as the team are just learning and can’t do all the children at once! Have a great weekend all x