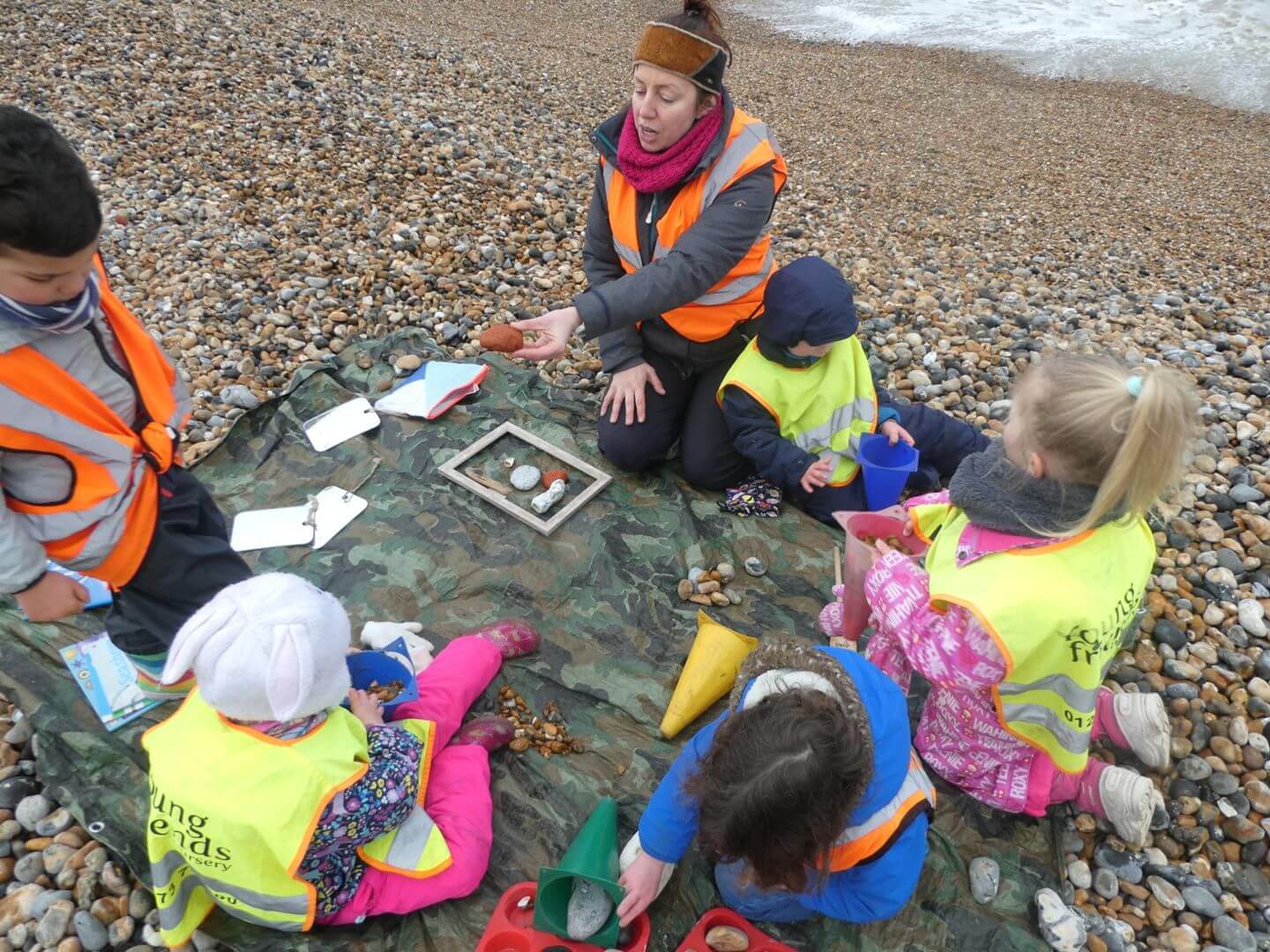 The groups are getting really used to their Beach School sessions and really looking forward to them. Most of all they love TT! They took turns carrying her down to the beach caring for her just as if she were real. Cute!!  When they arrived they had great fun with Leonora, talking about what Simon the Seagull needed for his birthday party. The children made some good suggestions for what needed to be done. “We can make stone decorations!” “Presents!” And of course, “Cakes.” They also made a picture for him because why would a seagull want a birthday card?! They collected different items together. Meanwhile, some of the children planned the games for Simon the Seagull’s party. They discussed creating climbing games and running games. Two of every Seagull’s favourite activities of course. The children were also interested in identifying the seaweed that they found. There are so many different types.
It was a cold and cloudy day at the beach and everyone was wrapped up warm and had a great time.

The children and Leonora went to a different base because there were beautiful flowers growing in the field and they all agreed that “We need to let the flowers grow”. They certainly are great at taking care of nature! So, they went to a new base camp with grand plans of whittling some magic wands as the Foxes have been using their super powers of late and needed some props. However, after exploring the rest of the park the children discovered the best and biggest puddles so it was only wise to relocate and move our camp to where the rain had settled. Some of the Foxes discussed the depth of the puddles using their feet and their legs or even by sitting in them. Thank goodness for their brilliant waterproof clothing. Others ran the length of them, setting up an Olympic long jump and splash! But the best was yet to come; after falling over on the hill, one of the Foxes realised that by turning over, they were able to slide down. This mud slide became the focal point for everyone. Sliding down, running back up again and sliding down one more time. To end the session, there was a champion stick prize for the muddiest child – the only problem was that the judge couldn’t decide! So much fun building resilience and working as a TEAM. Well done Foxes.

As we’ve talked about before we have grand plans for our Kitchen Garden for the Spring. This year will see our biggest yield yet but before that there is a lot of hard work to be done. So this week was a staff day at the Kitchen Garden. This is always a brilliant team building activity. So a group of staff, and myself and Alex – and Karl our loyal maintenance genius – who is fast becoming a member of the team, arrived at the plot armed with sturdy boots, spades, gardening gloves and sandwiches. We dug and dug and cleared and got so much done. We expanded the beds, made a bed just for flowers and Karl and Alex made a new

fire pit area. There is a lot more to do and the work plans for the next couple of weeks will see new pathways and beds and an all round more exciting place to be for the children. They will return after half term when we have prepared for them – until then its adults only but it’ll be 150% worth it! x