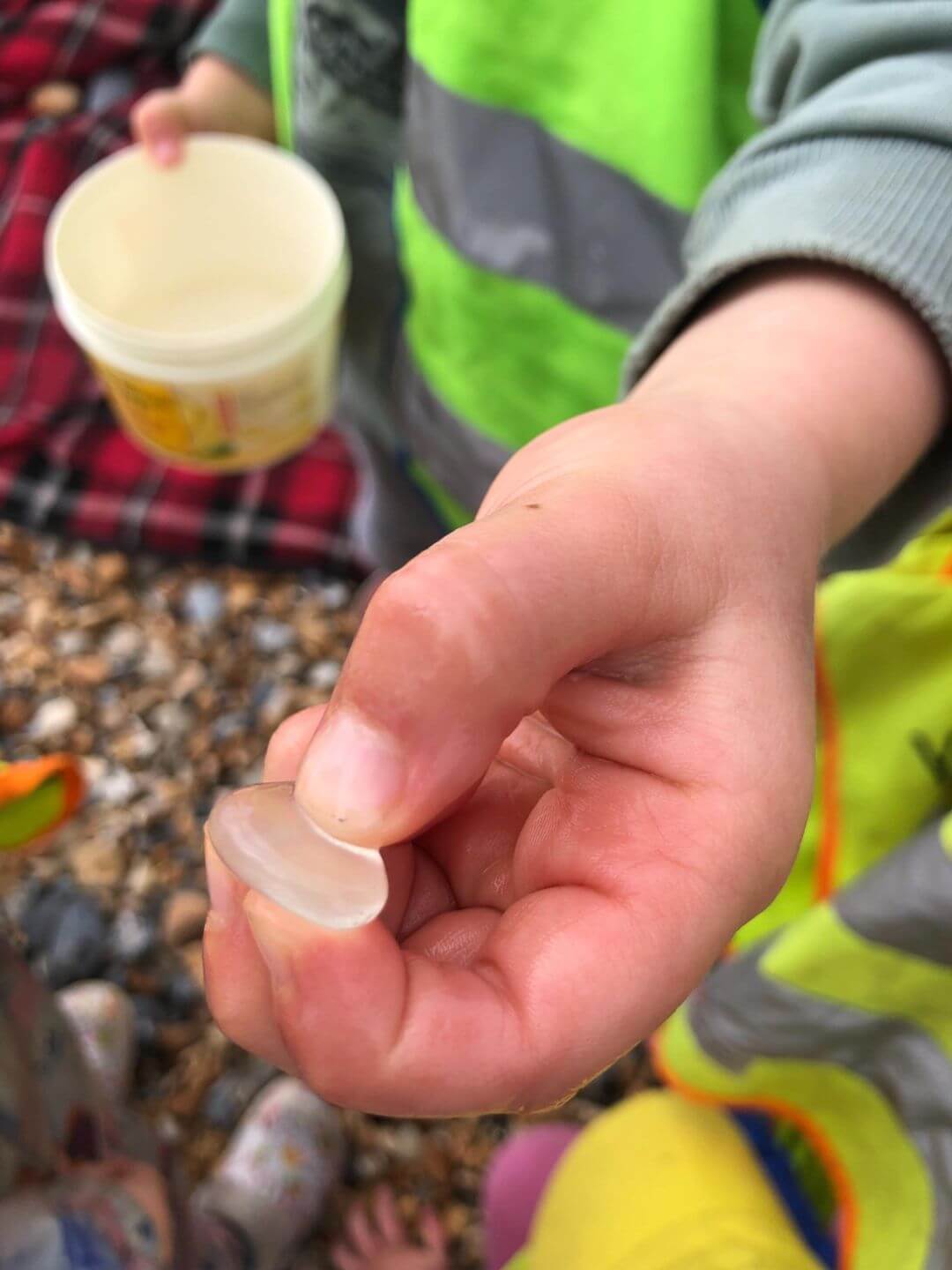 Let’s breathe the sea in and breathe the sea out. The calming breathes started the Foxes’ session.
They did a quick weather check and wondered down to the beach. There were some beach treasures to be found today. Glistening on the foreshore was a piece of sea glass, also known as a mermaid’s tear or better known as treasure! It was a discussion point because that glass was once rubbish that ended up in the ocean. Collecting sea glass is part of being an eco warrior. The other treasure came in the form of driftwood which could be drilled. While practicing with the drill, the children talked about textures and found stones to make holes in too. This proved impossible but the children were confident enough to try a few different stones. Leonora filled the bucket with water and the children created their own filling game. Handfuls of stones went in slowly and made the beautiful sounds the children had enjoyed last week.

It was impossible to say goodbye without some stone throwing so the children gathered all their strength and power to throw the stones in the water, counting as they did so. What a fun session it was for the Foxes.

Forest School for the Badgers

Up the hill we go! Part of the fun of forest School is the journey. It allows the children the time of practice their road safety and their love and care towards their walking partners. It is wonderful to see how the children take all of this on board as they walk, filled with excitement, to Forest school. Surrounded by trees, the Badgers played their favourite games – Find a tree & Where are you. Learning the rules of the game gives them the opportunity to play independently. Today Kitty had left some clues for the children. Could they look for faces amongst the trees and grass? There was some
animated discussions about the faces they had seen. The children were using and developing their vocabulary in the process. Then Kitty set them a challenge to find the tallest tree. Thankfully she had also left a measuring tape so they could check. They made decisions as to how they wanted to do the measuring and which trees looked the best. As part of the riddle of the day the children had to guess what goes ‘squelch’ when you walk in it. With their thinking hats on, they correctly guessed that it was mud. What luck because Kitty had also left them so letters to sound out: m-u-d. Using their listening ears, the group were able to blend the sounds to make the word. Well done guys as it’s an amazing skill to have. The session ended with a lovely story and the forest school chant. The badgers had a great time.