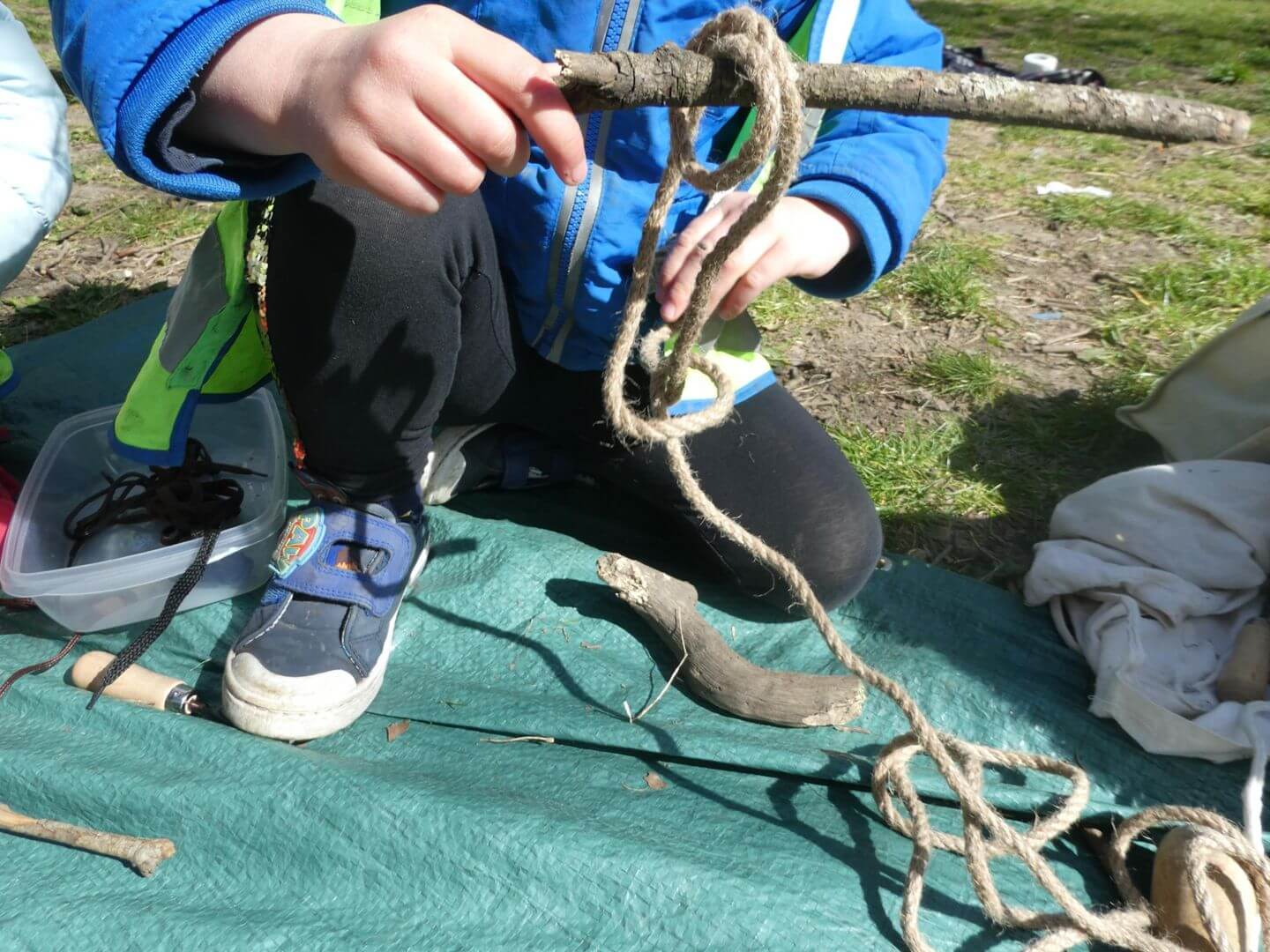 The Foxes were so excited to go to Forest School. They checked with Leonora what tools they wanted to bring to the park and helped her pack the bag to get ready. There was a problem with Kitty’s house from the previous week. It had fallen down! Oh no! Today’s challenge was to learn how to connect the sticks so hopefully that would not happen again. The children sat attentively as Leonora showed them some important knots that could be used on sticks to turn them into magic sticks or connecting sticks.
With their new found knowledge, some of the group spent their time deeply immersed in wrapping their own sticks while the rest of the group went to explore with the tools. The sticks were transformed into rain sticks, swinging sticks, a stick wrapped with a feather and even a gate for Kitty to go through. The discussion and planning along the way gave the group the chance to plan and share their ideas.
The rest of the team were exploring sticks and holes. The Foxes love to drill using both the hand drill and the palm drill with confidence. They waited for their turn and shared the tools with each other.
At the end of the session, the group came together to share their experiences and used the story stones to create a lovely story. The Foxes were able to make connections in the story by listening to each other and using their imaginations. It was lovely to hear the story about Ollie the Owl. Great job Foxes.

It was a cloudy day for our Beach School session. This didn’t stop the Hedgehog Beach team who were well prepared with their waterproofs. As the team arrived at the beach, there was a listening challenge. Could they find something beginning with ‘S’? The first guess of ‘stones’ was so clever and tuned into that beginning sound but it was not what Leonora was thinking of. ‘Sea’, they exclaimed together and off everybody went to set up at the Beach. They rushed down to the shore to watch the calm water and throw their pebbles in. To power up the pebbles, they needed to tap two pebbles together and then throw them in. They made a rhyme with Leonora to help them charge up the pebbles. ‘1,2,3, Into the Sea’. They chanted together as they tapped and threw.  As they were collecting the pebbles, they noticed a lot of red stones and a brick. They discussed where the stones came from and what the brick would be used to build. The small red stones were collected and taken back to base but the big red brick was powered up to be thrown in the water. ‘1,2,3, Into the Sea.’ After another game of ‘I spy’, the children could see the ‘S’ on the board and the seagulls in the sky. They guessed it so quickly!  We brought along the blackboards today which allowed the children to do some mark making with the chalk they had found. It was great to use the boards and also the rocks and walls around to be creative. By the end of the session, the children noticed how much water had covered the red brick. The tide had come in very quickly. It was time for a story to end the session. THe Hedgehog team used the ‘Seaglass Stories’ to create a story that linked really well. There was a lovely theme of the sea creatures looking after one another which was very heartwarming. The children were able to listen to one another and wait for their turn to share their input. Well done Hedgehogs for all your great work.

At the kitchen garden its all system’s go! The Badgers have been getting involved in all sorts of things like emptying the poly tunnel beds and helping to top them up with fresh soil ready for those tasty summer crops. Alex has been starting to fit our new automatic watering system and teaching the children all about it. Our new water butts are ready to go – nice and high so the water flows downwards (lessons about gravity!) – next week will see the addition of the pipes and automatic water feeders etc. Lots of science to be learned there. All the potatoes, planted by the Fox’s last term are now starting to sprout and its time for the Badgers to look after them – they’ll be topping them up with soil as the leaves get taller. The children also planted our sweetcorn and peas in their ‘children only’ patch. The pumpkin plants are nearly ready to be planted out – we are just waiting for that last frost – has it been yet? It’s such a risky business. Finally, it rained this week – our last week of worrying over the weekend then it will be automatic waterers go! It’s really getting exciting – whilst at the same time calming, at the Kitchen Garden. Well done Badgers.

We are looking for a highly qualified Nursery Manager with a passion for the outdoors and sustainability!

Download our application form, fill it out and send it to enquiries@youngfriends.co.uk

Happy Saturday! 🌻 We'll be feeding the birds today! 🐦
What are you and your family up to this weekend? Comment below! 👇 #YoungFriendsNatureNursery

We are looking for a highly qualified Nursery Mana

Our latest Outdoor Chronicles blog is all about th

One of the best things about Young Friends is our

A lovely #TuesdayTestimonial for you from one of o

This is our Make and Do table in our lovely conser

Here's Alex with a Kitchen Garden Update for you f

Are you or someone you know a highly qualified Nur

Why are the boxes always more fun than the thing t