Beach School began with the usual deep, meditative breaths of air, sea, clouds and grass. This has become a pivotal moment for the children as they transition from walking along the roads down to the beach. The children are able to use their observation skills as they look around them thinking of what they can ‘breathe in’. It’s so lovely to see them stop and think about what is natural and beautiful.

Having now settled into the routine of Beach School, the Foxes know what they enjoy. Some of the group love to watch the waves come in and out. Or perhaps they let the water chase them back up the beach in an imaginary game of ‘tag’. They are testing their own speed as they run away from the gentle waves of the low tide. Some gather pebbles to throw, aiming for a lovely ‘plop’ sound. Another child collects small pebbles to sprinkle back on the shore repeatedly, taking into account the sounds the gentle shower of stones make as they fall.

Growing ever confident with the tools, the driftwood found by the Foxes, was drilled and sawed with ease. TT, the Beach School mascot needed a bed and there were discussions about what was needed to connect the wood to do this.

Part of the Beach School experience is learning about teamwork. The Foxes gathered for a game of ‘Fill the bucket’, a game of team work, patience and skills. Do not spill the water! They were able to support their friends and give lots of encouragement as each of them took turns to carry the can of water across the beach, Well done.

The session ended with a wonderful story using the Seaglass Stories. Each member of the Foxes team contributed their part of a creative story about friendship, love and care, just like life back at nursery. Great work Foxes.

The Badgers were all geared up for their Forest School session. They knew to look for Kitty, the Forest School mascot amongst the trees. Lo and behold, she was there with a clue to start the ball rolling, or to be more precise, to start the dice rolling. Kitty had set some challenges for the Badgers team. Could they follow the instructions to roll the matching number on the dice and then follow the command? If they rolled the 5 on the dice, for example, Kitty asked them to collect 5 sticks. After listening to the instructions and matching all the numbers to the sticks, the children needed to locate the final clue. Could they make the pattern that Kitty was asking them to make? The Badgers have been working on patterns during their Forest School sessions. Today was all about recognising numbers, counting and using sticks and leaves to recreate patterns.

Following on from their work last week, the Badgers made some more holes for their hoop-la game. The process of making their own game from start to finish is amazing and they should feel so proud of themselves. They have really learnt how to hold the hand drills and use them with purpose. This really helps their thinking skills as well as communication skills as they are always talking about which size drill bits they would like to use.

Together the children played with the parachute, trying to not let the ball drop to the ground. It was a lovely game as the Badgers team were able to take it in turns to throw the ball back onto the parachute.

Forest School can enable children to work together a lot. This can be in the activities they do or the games they play. A firm favourite with the Badgers team is 1,2,3, where are you, which they play really well. They listen out for each other and know the rules we.. They also learnt a new game called 1,2,3, Find a tree. Both these games involve a lot of running but that did not tire out the Badgers. With a chant and a farewell to the trees, they headed back for a yummy lunch. Well done everybody.

This week we went on a long walk looking for lavender. We found lots of purple plants and eventually found one that looked and smelled like what we were looking for! On our walks this week we democratically decided which way to turn at each corner, and after a few votes the children took turns calling the votes. We looked for paw prints in the mud and found some ripe raspberries and some mushrooms around the plots. We tried the raspberries but decided not to try the mushrooms as we knew some of them aren’t edible. We identified some of the blooming flowers and found a pile of poppy heads which we measured against our bodies. We used the poppy heads, along with other natural materials, to paint, stamping different patterns onto our paper. We did lots of bug hunting too, and found that lots of different bug liked our plants. For snack we found our cucumbers had ripened and harvested a couple of them, we found them very juicy.

How does Young Friends Kindergarten work?

We take a genuine child-initiated play approach, which nurtures your

How does Young Friends Kindergarten work?

We take a genuine child-initiated play approach, which nurtures your child’s interests in an autonomous but stage-appropriate way.

Winter had returned for the Foxes' Beach School session.

Winter had returned for the Foxes' Beach School session. 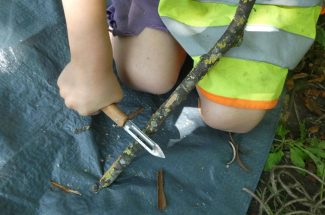 We use cookies to ensure that we give you the best experience on our website. If you continue to use this site we will assume that you are happy with it.OkCookie policy