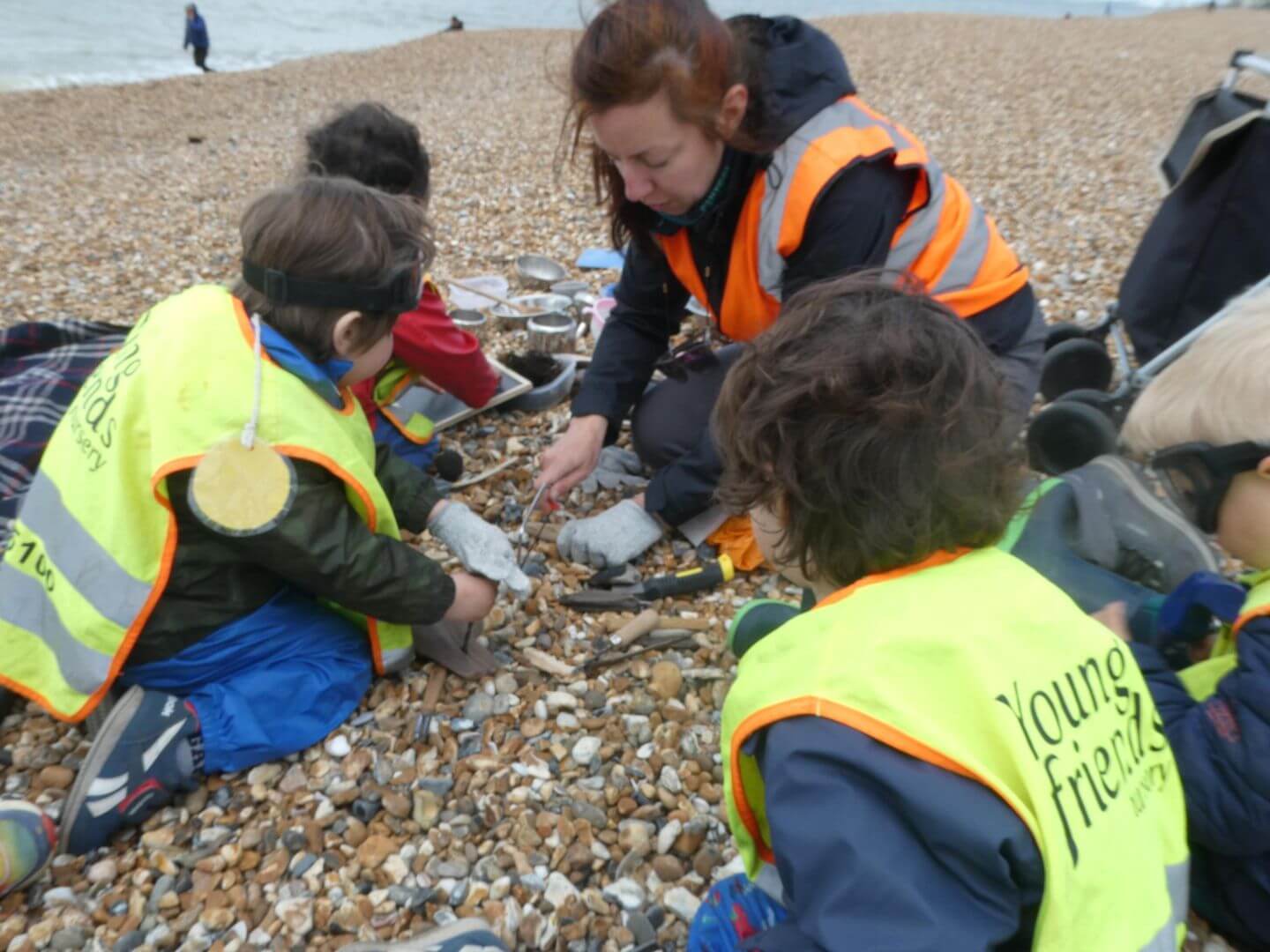 At the kitchen garden this week the children have helped to plant the pumpkins outside and they got their proper) rakes and rakes over the potatoes so we get a bigger yield. The children didn’t really need to water as there’s been a lot of rain but there has been masses of weeding to do and getting things in order after the high winds. They tidied up the pond area and did lots of weeding in their own planting bed – the most important bed of all!

On arrival at the beach, there was a letter from TT, the Beach School mascot. She invited the children to use the clues to spell a special word. What is our favourite way to celebrate? The children had picture clues and letter clues to help them. Together they were able to sound out the word ‘Party’ and they decided to get to work. What could be the party hats? ‘Let’s try seaweed!”Here’s some wood.’ The wood soon became birthday candles too and the children collected stones to make a mountainous cake. There was a lot of collaboration and counting throughout the activity for each stone and each candle. (Apparently TT is 5!)  It took some creative thinking to find some scoops for the cake and they children shared the lovely cake together. Meanwhile, at the tool workstation, cuttlefish were hammered, charcoal was bashed and written with and driftwood was chopped. These children were very determined and precise with their ideas.What a creative group, working together to make each Beach School session fun.
Well done Hedgehogs.

It was the last week of the half term for the Foxes and the Hedgehogs and that can only mean one thing – Party time! At the forest, the Foxes found pieces of a puzzle. Who left them there? Could it be the forest fairies? They pieced it together as a team and read the message. it was from the fairies and they wanted to invite the Foxes to their party. Sadly, the storms had destroyed everything and it was down to the Foxes to help them. Could they decipher the clues to know what to do? They had to listen to the starting sounds of the words and the descriptions in order to guess what the fairies wanted. They got to work, making cake and setting the table and chairs that they had prepared in the workshop. The Foxes displayed great focus and good listening skills in order to complete the challenge.As they played and set up for the party, other children found fallen leaves and flowers and wanted to make magic wands for each other. They also practiced working with the tools safely and confidently. The foxes love drilling and experimenting with mud and twigs to make holes. What great teamwork the Foxes have shown during their Forest Sessions. Well done everybody.