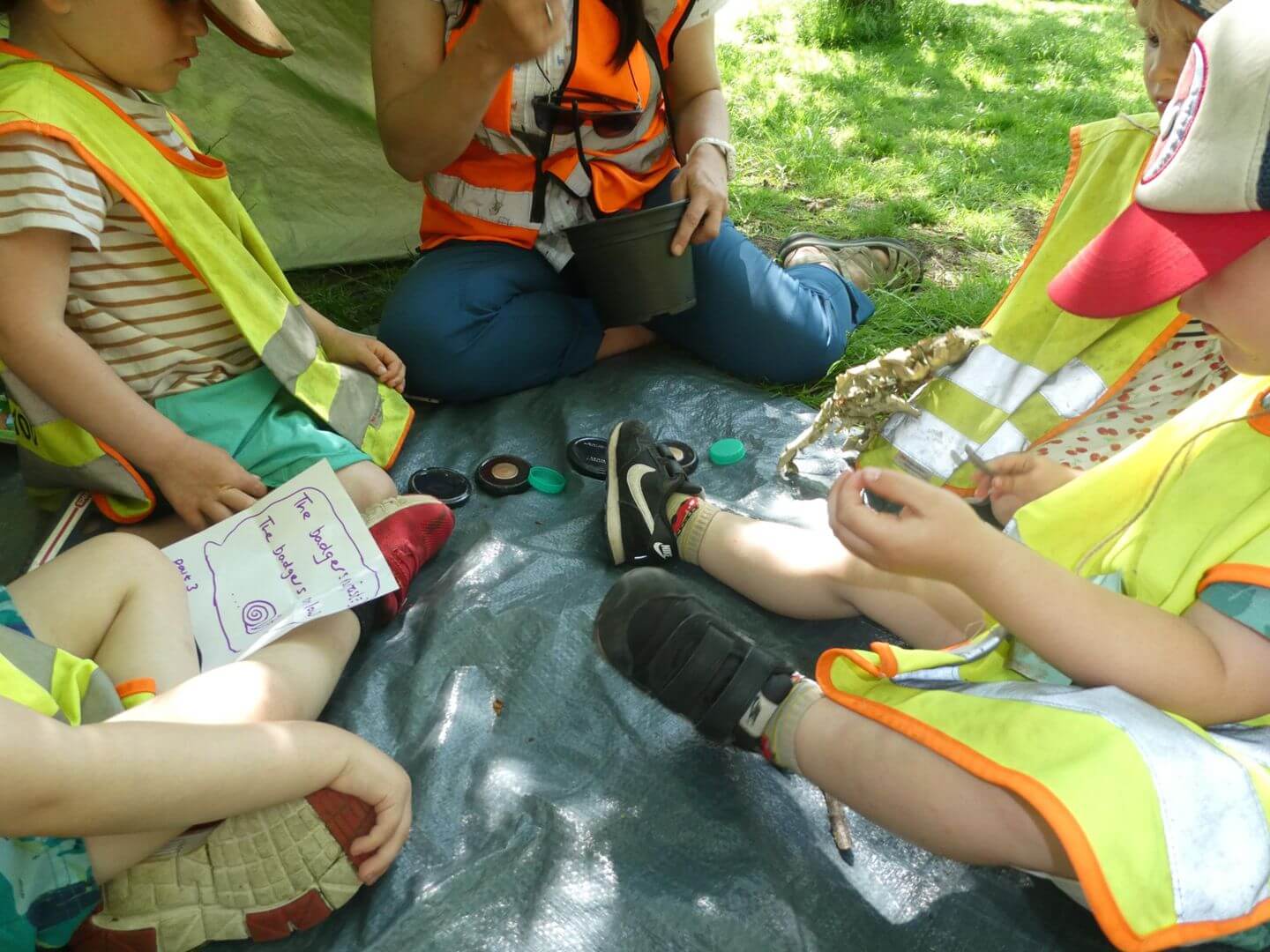 Week 2 of Beach School for the Foxes continued with an exploration of sounds. The session started with some percussion instruments and other items that might make a sound. Leonora showed the children each item and shook it, hit it or rustled it. The game was to try and recognise the sound and make a guess. The Foxes paid close attention and were able to get each one correct.
And with a deep breath of sunshine air – breathe in the sunshine , breathe out the sunshine – then headed off to the beach. Taking these deep breaths is an important way to learn how to be calm and also notice what is around you. One of the children requested to breathe in the grass which of course they did. One deep breath in, one deep breath out.
As they reached the pebbles and prepared for snack, they each started to make their own sounds. Using pebbles to tap together, there was a lovely sound that they could make themselves. So with Leonora, they did some pebble tapping, up, down and to the side. What other sounds were there at the beach they all wondered?
The children enjoyed scooping the stones into buckets of water once again. Some children were counting, some children were dropping the stones in taking note of the sounds they were making. And sometimes, no props were needed as a few children used parts of their body to make a sound – cue lots of tongue clicking!
The whole group moved down towards the water for some water watching and pebble throwing. The children found a spot on the groyne that allowed them to throw the pebbles across to deeper water. And what happens when you tap the groyne with the pebble? Or even a metal cup?
The sound exploration was fun and it was great to see the children tuning into what was around them even with a busy beach around them. What great focus and what super teamwork.

With all the wildflowers in bloom, it was impossible to not see them and the lovely fuzzy bees  enjoying their nectar. There were so many beautiful flowers,  but the striking poppies attracted the most attention from the children and the bees alike.

The Badgers like challenges and in particular riddles. On request, there was a riddle set for the group to start them off. What has a bushy tail? What is grey? What climbs trees? Of course it was a squirrel. Last week the group saw some squirrels jumping from tree to tree. Would they see them this week?
The session started with a game of 1,2,3, Where are you? The Badgers showed an understanding of the game and its rules and were able to play it by themselves.
Guess what, Kitty had left a note in the snack bag! The Badgers were very excited indeed. They needed to decipher the clue in order to find Kitty. But where was she? It sounded like she would be in a tree so they all discussed which tree she might be in, on or under. When they did find her, there was another clue! Kitty was setting the Badgers a challenge to make a pattern. Could they follow the pattern? Could they continue it as well? The clues continued much to the Badgers’ delight (there were 4!).
Some of the children continued with this theme of pattern making for the rest of the session and went on to hunt more leaves and sticks to make the patterns. Other children took part in some team work games. Could they keep the ball on the parachute? They would have to work together to find out and make it work. Meanwhile, the tools were out and the children enjoyed a lot of drilling and sawing.
They sat under the shelter and enjoyed a story to end the session and lo and behold, they spotted not one but two squirrels. What a great session!

The children have had a rather damper experience at the Kitchen Garden than the week before but this has of course been making everything grow like crazy. They decided to use the inspiration of lots of rain to investigate floating and sinking, and what better to use than the plot water tank. Faye and the children made boats out of different materials and watched and talked about what would happen – of cour

se, the cork one floated best! With the warm damp weather many weeds have shown themselves and the plot is not just a place to play, so they got to work weeding the herb and flower bed. They also planted some broccoli and peppers, and watched Alex using the rotavator to turn the soil over in preparation (Alex loves that machine!) – which was so loud there was much laughing and ear covering covered ears! The team went on a scavenger hunt, making a list of what they wanted to find and marking the things off when they found them. The children checked on all the plants growing around the plot to check the rain had got to them (and searched for insects enjoying the damp along the way), and made sure the ones in the poly tunnels were nice and moist too. Then, using their Forest School skills they made a den to shelter them from the sun – good thinking children!