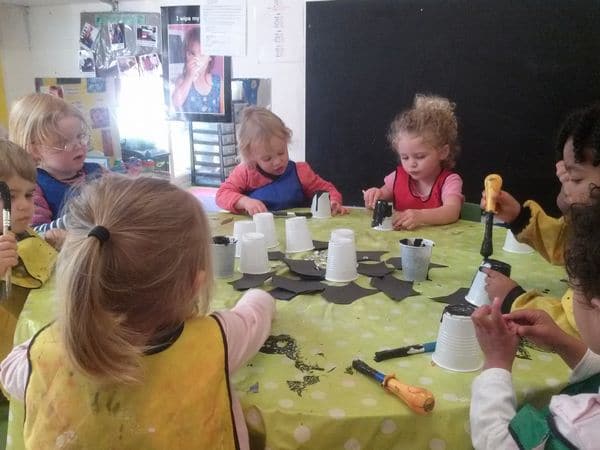 Well it’s all been very quiet in the Chimp room this week as many of our littlest ones are graduating to the Howler room. They’re now old pros at the Chimp room staples such as singing 3 Little Bears. Some of the Chimps have even started telling the team how many bears are in a group. Little geniuses. We always like to do a bit of cleaning here and what’s more enjoyable than a toddler with a broom? The Chimps have been sweeping flour around the builder’s tray and noticing the patterns the sweeping creates as they move. For their physical activity, the crowd pleaser bubble wrap was out for a scrunch and a squeeze. The story of the week was “Number 1, Tickle Your Tum” and the children enjoyed copying the gestures and repeating after the team. Nothing cuter than babies saying “boo.” They learned quite a few Makaton signs for animals as they sung Old McDonald Makaton style which featured “pig,” “cow,” “bee,” “duck,” and “bird.” There was a never seen before musical duck in the room and it sure knew how to win the crowd. With numerous buttons and a symphony of sounds and music coming from it, the Chimps were entertained for a good 5 minutes which in Chimp time is about an hour. Tick, tock….

The Howlers have been singing about all the colours of the rainbow, and doing a few colourful activities along the way. Cirrus, nimbus, and cumulous clouds have never looked so colourful as the children stuck cotton to paper and used pipettes to drop an array of colours onto them. Never to go out of style, the abacus got some wear and tear this week as the Howlers practiced their counting and colour identification skills. Gillian and Kelly must have been getting tired in the kitchen as they enlisted the Howlers’ help in preparing fruit salad for the day’s pudding. There was lots of chopping, plucking, and sneaky chomping during their prep work but we don’t mind as they often do more eating of fruit during cooking activities than actual meal times. Practicing their modelling abilities, the children used moulds to create sand structures and shapes and made some doughy sofas and seats for the compare bears. They’re so well loved those bears.

The Baboons do love this time of year and they’re getting the jump on all the rooms in the race to Halloween as they’ve already started their festive crafts. The room was awash with white paint as the Baboons created their handprint ghosts, essentially covering everything and everyone in painting range. After their spooky prints, they turned their attentions to plastic cup bats. The Baboons cut out some wings and stuck them on their painted cups to be added to next week’s bat cave. Inspired by their interest in last week’s Sukkah which featured dangling fruit, the Baboons opened a grocer’s with fresh produce and took to paying particular attention to the weight of their baskets. Those fruits and vegetables do weigh a fair bit, don’t they? Getting a head start on their Numicon skills, the Baboons have been mixing the Numicon shapes with buttons, covering the holes and predicting how many buttons they need for each shape. There appears to be large insects overrunning the small world city as a Baboon was overheard saying the spider was eating the car. Well that image certainly won’t help my arachnophobia.

This week, the Gorillas spent time going over our eco values and why it’s important to recycle and limit waste. They ensured that their recycle bin was only full of paper, lights were off, and taps weren’t left on. Kaila visited to talk about her best friend, Paul, who has been helping her do things she doesn’t think she can do. The Gorillas talked about why it’s important to help others and to always try, even when they think they can’t. To support this theme, the children also read “Giraffes Can’t Dance” and talked about the things they could do and/or would like to do. The phonics sound/letter of the week was “t” and the Gorillas have been “t, t, t-ing” all over the room. They’ve been using tracing sheets and attempting to go over the letter with marker pens. For ICT, the Gorillas have been mastering their dj skills as they took over from the adults and led music sessions and controlled the crowd with musical statues.