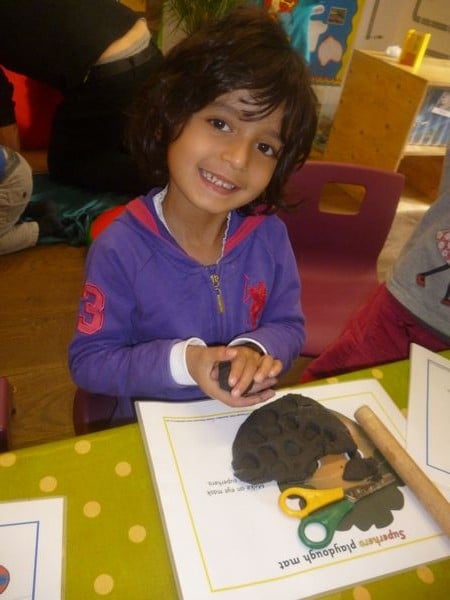 This week we have been joined by lots of new friends in all of the groups and the children have made them feel very welcome. Saying hello, learning their names and learning all about the special things that surround making new friends. As a result every one of them is settling well, at their own rate of course, but really well. We’ve been out splashing in the rain in willies and raincoats and making mud pies and cakes in mud kitchens as well as the usual amounts of fantastic indoor activities. Here’s a rundown of the highlights….

We have had a fantastic superhero theme this week which the Gorillas have naturally absolutely loved. There have been lots of talking activities with the children making up superhero rules like helping each other and running/flying outside and learning about and making up all sorts of different super powers. After receiving a letter from a ‘special hero’, the children had to choose different body parts from their favourite superheroes and put them together to make their very own. The children even learned new superhero songs and did strong action movements to them at music and movement time which was rather funny to watch. The Gorillas also did calming yoga sessions where they copied slow and purposeful movements to beautiful ‘yoga’ music. They have got a new pot of lots of counting and sorting mini dinosaurs to match and count which they have loved a lot more than predicted – they have been weighing them and talking about species and goodness knows what else – they were certainly money well spent!

The Baboons got to work on their new autumn display this week by creating some wonderful puff paint pumpkins which they will use for their pumpkin patch board. Puff paint is brilliant stuff – it is powder paint mixed with salt and flour and water. The children drip it on the paper in different patterns and then it is put in the microwave to puff up – crazy! The role play area was transformed into an airport this week – the children travelled all over the world. They checked departure times, made and used their own passports and talked about their favourite places to visit and go on holiday to. For creative time the Baboons used all sorts of materials to make their own glittery fairy wands and used them to practice their big and small circular movements. There was lots of physical play too, with games of bowling in the garden and some lovely bendy stretchy yoga for music and movement.

The Howlers have welcomed lots of new faces this week. Some of the Chimps have made a joint move up and have settles amazingly well! The children have been creating funny monster pictures with googly eyes and lots of paint. They also worked together to paint a big green swamp for their monsters to live in. The little ones loved using the diggers in the mud outdoors and stomped and roared their dinosaurs through the sand tray in the room. At group time the clever Howlers pointed to their own family photos and showed each other their special pictures and named members of their families (please make sure you bring in family photos if you haven’t as they do refer to them a lot and it would be sad if any of them felt left out). They also did some fantastic tower building with giant mega blocks.

The little Chimps had a lovely time this week shaking their shakers and using them for some noisy artwork where they dipped and rolled them in paint and created some colourful prints. In the sensory area there were squidgy glue gloves full of all sorts of different things to explore and animal pictures to find and pull off the interactive wall. They did animal noises whilst they did this. There was a mini teddy hunt in the room where the babies had to search for hidden bears under boxes and material and there was lots of building up and knocking down stack ‘em’ cups. For group time the Chimps practiced copying waving and clapping and in the messy area there was sieves in the water and hidden keys buried in jelly to find and explore.

Enjoy the pictures and have a great weekend!