New Year’s back and this time with a sheep…and some fish (Week beginning February 16th)…. 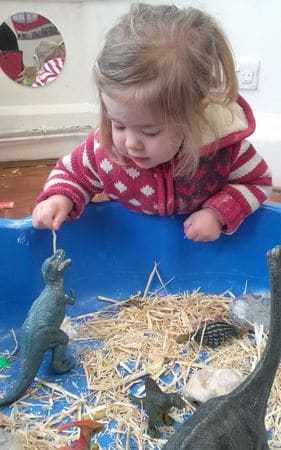 New Year’s back and this time with a sheep…and some fish (Week beginning February 16th)….

Well it’s Chinese New Year (Year of the Goat) this week and the Carly, Carla and Angela have kicked it off by helping your little Chimps create some beautiful blossom prints. Plum blossoms symbolize courage and hope and blossom at the end of winter. Yes, bring on the spring! The older chimps have been stomping around and showing the little ones how things work in the Chimp room including how to decorate their gigantic shape sorter box. After all the building blocks disappeared into the slots it was time for the random objects to vanish from the room. They had a tough time finding where those pesky shaped pinecones fit. Some of the chimps braved the cold to spend some time in the vegetable patch watering the soil – and sprinkling it onto the side for good measure. The sensory bag this week was overflowing with jungle props and the Chimps practiced their Makaton signs (as well as a few made up ones) for various animals and actions. The Chimps also received some funky new foam blocks this week which have already endured a good chomp and a chew but also some crafty constructions as well. Last week’s small world had a healthy revamp with a forest made from play dough and broccoli trees. That’s one way to get them to eat broccoli! Why do things always seem to taste better when they are not supposed to eat it? Angela has been getting to know all of your gorgeous babies and is really enjoying her new role in the baby room. Well who wouldn’t?

The dinosaurs have stomped back into the Howler room and have been hiding under the hay in the sensory tray – which is fine with Howlers because they do love a game of hide and seek. At the mark-making area the children have been working out their little writing fingers with salt writing. A few little clever clogs’ have even been making shapes and saying what they are. For their maths activity the 5 little ducks were dwindling down to none and the Howlers had to call for Mummy Duck to get them back again. In the construction area the diggers have been digging and also doing a bit of mark making with the blocks and tree stems. The Howlers favourite story at the moment is ‘Hooray for Fish’ and they did the team proud as they watched a telling of the story on their tablet, correctly guessing which fish were coming next. The Howlers have been back in the vegetable patch for some early planting and soon we will be able to boast about our parsley, cabbage, basil and potatoes (hopefully). The teddies have also reappeared in the Howler room to support the children in being kind to each other. Lots of hugs and gentle hands all round then.

It’s been a grand old celebration in the Baboons as they have enjoyed a multicultural sensory table for Chinese New Year which included chopsticks, red play dough and rice and gold glitter. Culturally, red is an auspicious colour symbolizing good fortune and joy. The Baboons had a wonderfully tricky time of using the chopsticks to pick up their play dough and rice, but they did come up with some rather imaginative ways of making the chopsticks work for them and some of the children even showed the grown-ups how to use them. At the creative table the children tried to get to grips with a bit of origami. They created dragons and their attention to detail was paramount; a few of the grownups were reprimanded for not having the correct paper for the dragon’s wings. This was of course duly noted and quickly rectified. Sorry Baboons. They also decorated their own fans and swanned around the room ensuring no one passed out in fits of heat exhaustion. Tuesday was also Pancake Day, so the children decorated their own paper pancakes with gluey syrup and colourful tissue. Mike (their persona doll) visited the Baboons this week to talk about his experiences of being left out. The children were very upset to hear that other children didn’t want to include him so they invited him to their afternoon snack and sang his favourite song to make him feel better. The dance room has been a place of rest and relaxation as the Baboons have learned a Hindu yoga song (Kundalini yoga) called “I am Happy, I am Good.” They’ve also learned a de-stressing breathing technique which requires some large elephant actions. Videos pending because my paltry explanation will do it no kind of justice.

The sea! The sea! As the Gorillas are still deep sea diving this week in their sea life area it seemed a perfect time to discuss human effect on the natural environments around us. The Gorillas have been discussing endangered animals like manatees, sea otters and polar bears. They also talked about the difference between wild and domestic animals and the kind of environments they live in. Their book this week, ‘This Is Not My Hat’, helped facilitate discussion about the concept of stealing and respecting others’ things. The Gorillas also created some resource overloaded Octopuses with pasta, junk modelling parts and paint. In the junk modelling area they have been putting their model submarines and boats to work, putting them in the water tray and watching them sink lower and lower with stones added. Kyla the persona doll stopped by to share with the Gorillas her favourite toys that she played with as a baby. This, of course, led to some animated discussion about the gorillas’ own favourite toys, including which ones they like to take baths with and stay with them for bedtime. Last week, the Gorillas had such a blast making fish from the plasticine that this week they had a go at forming letter with it. “G” apparently looks like a snail, apparently. We must apologize in advance for the next activity because the children found another use for mirrors as they finger painted various designs on their individual mirror mats and then laid paper over the top to print their designs. So, if you’re wondering why your freshly cleaned mirrors, or windows, are stuck with paper, your ever resourceful child is doing a bit of printing. Expressive arts and design, anyone?